Fianna Fáil TD reflects: ‘It is not the first time that Cornamona didn’t share my view’ 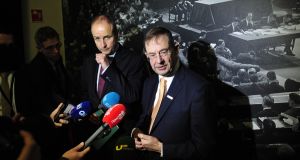 There is a view that the outcome will not have done Eamon Ó Cuív any harm, with a far less crowded field in the No camp. Photograph: Aidan Crawley

Mayfly season had a different texture on Lough Corrib last weekend, as Connemara woke to the exit poll results on the abortion referendum.

In less than the time it took to cast a vote and count it, thousands of the tiny insects had spent their short lives, and anglers spoke of one of their best trout seasons in years.

Fianna Fáil TD Éamon Ó Cuív, a prominent No campaigner who lives in Cornamona on the north shore of the Corrib, normally spends Saturday mornings in a gruelling series of clinics from Joyce Country to Maam and Tully Cross.

Last Saturday, his destination was the count centre in Leisureland, Salthill. When he arrived, there were few familiar faces, with only a handful of like-minded No voters in the hall.

By then, box after box had been tallied by the Labour Party and Galway’s Together for Yes, with coastal areas among the most enthusiastic in the county. The final vote was 65.9 per cent in favour in Galway West. Some city boxes were up to 80 per cent, as was Cleggan north of Clifden.

Ó Cuív’s home box in Cornamona recorded a Yes vote of 54.98 per cent, according to the tallies. “It is not the first time Cornamona didn’t share my view,” he said.

A former Gaeltacht minister with responsibility for the islands, Ó Cuív still attracts a strong following in offshore communities. However, his views on retaining the Eighth Amendment were only reflected in one island box across the county border in Mayo -Inishturk voted No – with even tiny Inishbiggle voting in favour.

“I’m still reflecting on the result, and I’m awaiting the legislation,” Mr Ó Cuív said this week, reiterating his call for both RTÉ and The Irish Times to publish full details of their exit polls. “We need to see the dynamic of this vote, as the question put to voters was so binary,” he said.

As to the legislation, he declines to comment on reports his party leader does not want amendments tabled. “Micheál Martin will be speaking to each of us,” he said. “But if the Government is really keen, it can just guillotine it... it knows it has 120-130 TDs in favour.”

Mr Ó Cuív said he spent only one night canvassing, and is far more preoccupied with assisting those on the wrong side of what he describes as “one of the most heartless governments in years”. He said he has never had so many crises on his desk, relating mainly to homelessness and health.

His party colleague, Cllr Seán Ó Tuairisc from Indreabhán, spent many evenings transiting the county, along with Frank Ó Dómhnaill, former manager of the Cornamona co-op.

Ó Tuairisc says he was “taken aback” with the result, as the feedback on the doorsteps had been supportive of their anti-repeal cause.

“There was a group of up to 11 of us, not under any particular banner, and we had two doctors with us when we went out to Inis Mór,” Ó Tuairisc says.

“People engaged with us, a lot were very concerned about the 12 weeks, and a few told us they were voting Yes, but we thought that was the minority,” he says.

“What bothered me was that the Yes side seemed to feel it had a monopoly on compassion, but at the same time everyone we met was very respectful,” Ó Tuairisc adds. “Several Yes campaigners came to my door and they had fluent Irish. They were very genuine people.”

Together for Yes canvassed north Connemara for three weeks, according to Hannah Gallagher, while an associated group with Irish speakers focused on south Connemara.

A Dublin-based group, Gaeil ar son Rogha, targeted all of the Gaeltacht areas on social media, and through television and radio.

Gaeil ar son Rogha spokeswoman Lisa Nic an Bhreithimh said the group was formed to campaign for marriage equality in 2015, and is a non-aligned grassroots group with active members in Dublin, Galway, and abroad. Student union members in Galway would also have been very active for repeal in Gaeltacht areas, she says.

Last week, as dust settled, few voters out west were willing to talk on the record.

“We really didn’t have the feverish activity that you would see in Dublin, and that left us time to think about it,” one parishioner living in Finny valley said. “The church kept a low-key approach, with one or two exceptions. And we all have kids who are students or working away who came home to vote.”

Frank Ó Dómhnaill says he was “not surprised, but was disappointed” with the outcome. “I am indebted to Éamon Ó Cuív for the stance he took, as he was not afraid to express his own view – rather than waiting to feel the way the wind blowing, like some others,” he says.

There is a view that the outcome will not have done Ó Cuív any harm, with a far less crowded field in the No camp.

“Ó Cuív has a significant constituency extending beyond Galway West and right down the Atlantic seaboard, because of his role as a minister who had a significant budget for community development with both Rapid and Leader funds,” said Sean Tadhg Ó Gairbhí, editor of online publication Tuairisc.ie. “He’s misunderstood in Dublin, when in fact he is a consummate politician, a hard worker, who is somewhat immune to, and therefore weathers, national trends.” 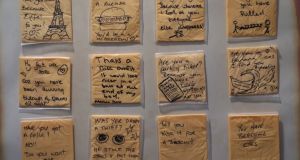