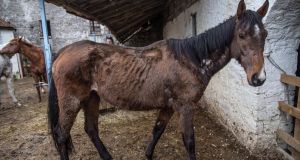 The thoroughbred horse was emaciated, with its ribcage showing, and in such poor condition euthanising the animal was considered.

A thoroughbred horse previously bought for £240,000, with past links to a famous Irish trainer and to a stud farm owned by composer Andrew Lloyd Webber, was found abandoned and nearly starved to death in a Cork barn.

Last year, the horse was found abandoned alongside 10 others, in a farm barn. The thoroughbred horse was emaciated, with its ribcage showing, and in such poor condition euthanising the animal was considered.

Four of the horses, including War Celeste, were discovered locked into stable pens. In one stable horses were found standing on a mound of excrement several feet high. The other seven horses were found by an animal welfare charity elsewhere on the farm, left without access to hay or adequate water.

At least three of the 11 horses had to be euthanised due to the condition they were recovered in. Two dogs in poor condition and a number of cats were also found at the farm.

War Celeste has since been nursed back to health by My Lovely Horse Rescue, whose volunteers initially discovered the abandoned animals.

The horse was originally bought for £240,000 in 2013 by a horse-racing club, China Horse Club. Preparation for the auction sale was done by a Watership Down stud farm, which is owned by musical composer Andrew Lloyd Webber.

After the sale the horse was moved to Ireland to be trained as a racehorse. At one point it was trained by famous Co Tipperary trainer David Wachman, who retired in 2016. However, the horse never raced, and was later sold as a brood mare, which is a horse used for breeding, in 2015.

This was the last registered sale of the horse at auction, bought from the horse racing club for £15,000 by a bloodstock agent. It is unclear how the horse later came to reside on the Co Cork farm.

Maddie Doyle, a volunteer with My Lovely Horse Rescue, said the charity regularly deals with cases of animals found in bad condition. “This case is probably one of the worst we’ve ever witnessed,” she said.

The horses locked in stables “hadn’t seen daylight in a long time”, and had been without care for “at least weeks and weeks”, she said. The animals were emaciated, with overgrown feet, and later difficulties moving due to their confinement, Ms Doyle said.

People were “uncomfortable” talking about cases where thoroughbred horses were abandoned, due to the significance of the horse-racing industry, she said.

China Horse Club was set up by Teo Ah Khing, a wealthy architect, entrepreneur and racehorse enthusiast. A spokesman for the club said the animal was sold in “great condition” in 2015, and it was “disheartening” to learn of its abandonment.

Gardaí in Cork are investigating the abandonment of the animals, and a Garda spokesman said officers were pursuing a “definite line of inquiry.”

Gardaí are investigating a single suspect who had previously run the farm but is since believed to have left the country, one local Garda source said.

Department of Agriculture veterinary inspectors seized the horses shortly after they were discovered, and several have been rehomed with rescue charities.