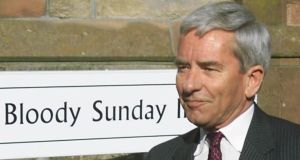 Lord Saville, chairman of the Bloody Sunday Inquiry, which found that the killings were unjustified and none of the dead posed a threat when they were shot. File Photograph: Frank Miller/The Irish Times

Police investigating the shooting dead of 13 unarmed civilians by British soldiers on Bloody Sunday in Northern Ireland are seeking statements from more than 1,000 witnesses.

British paratroopers killed 13 people in Derry more than 40 years ago after opening fire on innocent civil rights protesters in an unjustified attack, a public inquiry has found.

Local people and soldiers who gave evidence to the inquiry, headed by Lord Saville, are to be interviewed, the Police Service of Northern Ireland (PSNI) said.

“As part of this investigation, detectives are now seeking to make contact with and re-interview any former soldiers and civilians who gave evidence to the Saville Inquiry or who may have information about the events of 30 January 1972 in which 13 people died and a similar number were injured,” he added.

It is necessary to re-interview witnesses because police cannot use Saville testimony in a criminal investigation.

Two years ago police announced they were going to re-investigate the killings after detectives and prosecutors reviewed the findings of Lord Saville’s 12-year inquiry. He found that the killings were unjustified and none of the dead posed a threat when they were shot.

That contradicted the long-standing official version of events, outlined in the contentious 1972 Widgery report, which had exonerated soldiers of any blame.

The Saville Inquiry prompted Prime Minister David Cameron to apologise to the relatives. Thirteen people died on the day, with a badly injured man dying six months later. The police made the appeal for witnesses to come forward on what is the 42nd anniversary of the shootings.

A commemoration march involving some of the relatives of the dead will be staged in Derry at the weekend.

The officer leading the investigation, Det Chief Insp Ian Harrison, said the PSNI was determined to conduct a thorough, professional and effective investigation.

“From the outset we said this would be a lengthy and complicated process and we now have the additional resources in place and a clear investigative process to follow,” he said. “For the investigation to be as comprehensive and effective as possible, police are asking for public support in the form of witnesses who gave evidence to the Saville Inquiry to now make statements to detectives.”

While anonymity was offered to soldiers who appeared before the Saville hearings, Mr Harrison said such protection may not be available at any future potential court proceedings.

“Contact has also been made with former military witnesses,” he said. “During the Saville Inquiry it was ruled that anonymity was granted to any former soldier who gave evidence unless his name was clearly already in the public domain. That ruling does not automatically carry over to the current police investigation. Anonymity will be a matter for a future court to consider.

“Police want to assure all who engage with the investigation team that all matters will be treated in the strictest confidence and the support and welfare of witnesses are important considerations. It is our intention to conduct these inquiries as quickly as possible.”

The PSNI said a series of notices will also be placed in local newspapers and other publications to encourage witnesses to come forward again.