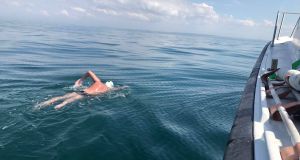 The distance between Dover and Calais is 34km in a straight line, but the current took Wesley Nolan in an S shape across the channel, so by the end he had swam 61km. Photograph: Facebook

A profoundly deaf Irishman has swam the English Channel in a 16½ hour marathon which began in the early on Monday morning.

Wesley Nolan (39), originally from Santry in Dublin, left Dover at 2.45am on Monday morning and arrived at Cap Blanc Nez south of Calais at 7.21pm.

The distance between Dover and Calais is 34km in a straight line, but the current took him in an S shape across the channel so by the end he had swam 61km.

Mr Nolan seemed to be in remarkably good shape for someone who had endured such a punishing swim.

He clamoured on board the Sea Leopard, a vessel which accompanied him on the trip, had a glass of champagne to celebrate his achievement and then fell asleep.

“He’s a legend, he’s done really well,” said Sea Leopard skipper Stuart Gleeson. “He’s in good nick for a guy who has spent so long in the water.”

His swim was to raise funds for the Irish Deaf Society to support their Irish Sign Language recognition campaign.

Irish Sign Language is the language used by most deaf people in Ireland, but is not recognised by the State.

Mr Nolan also maintains that the Government needs to introduce the access-to-work scheme for deaf people which currently operates in Britain, where he lives and works.

“I’m all too aware that my deaf friends and peers in Ireland have not been given the same opportunities at work. Language barriers still remain in the workplace – and in hospitals, GP clinics, in schools and so on. I strongly believe that to change this, Irish Sign Language has to be recognised.”

On its Facebook page, the Irish Deaf Society congratulated Mr Nolan on his achievement.

“Congratulations to Wesley Nolan who has completed the momentous task of swimming the English channel! From all of us at the Irish Deaf Society, we would like to give the biggest Congratulations for his amazing achievement!

“Wesley has been fundraising the past eight months for the Irish Deaf Society’s ISL recognition campaign and we thank all those who have donated to his fundraising page.”