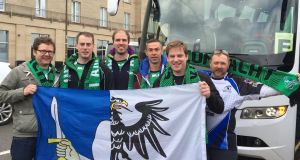 We made it! Connacht fans arrive in Edinburgh. Photograph: Tomás Kenny 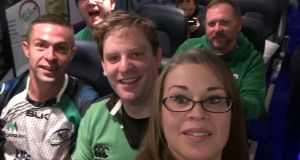 Only a few years ago I would regularly go to what is now the Clan Terrace for Connacht games. I would go into the Sportsground on my own, sure to bump into a friend, because there were so few people there you would find each other easily.

How things have changed. I was in the Sportsground at the semi-final last weekend 45 minutes before the game started, and it felt like I had arrived late! The crowd were in full swing and The West’s Awake was getting the full treatment.

As soon as the match finished the scramble for Edinburgh began. Not for tickets, because they were easy to get, but for ways to get to the final, trying to figure out travel arrangements.

A lot of prayers have been said for the genius who set this fixture for Murrayfield a year ago, and on the same weekend as the marathon, meaning that accommodation is impossible to get.

After looking at flights and rental cars in about a dozen UK cities we decided on getting the bus. And so, along with thousands of others, we left Galway at 10pm on Friday night (with pillows, a good book, and a hip flask), stopping in Athlone and Dublin, then it was on to the ferry and we arrived in Edinburgh at 10am.

We have a few hours after the game today before leaving at midnight to start what will hopefully be our merry 12-hour bus journey home again.

It is a bit of a crazy itinerary, but we never dreamed of not going. It will be a long road, but it’s been a longer road to get this far.

The excitement has been building in the west all week. The Salthill Prom has been turned green, as has most of Galway city - Connacht Rugby has become a serious brand in the province; everyone, no matter what their sport, is behind the team.

It is really difficult to describe what this means to people. Regardless of where you are from in Connacht, the chances are you’re not too weighed down with medals of any colour from any sport. And Connacht Rugby was the poster boy for that lack of success - so bad in fact, that our right to even field a team to go and support was called into question when the IRFU considered disbanding it.

I remember on the march to Lansdowne Road in 2003 being joined by people from the other provinces who were on our side - and with their support we were able to keep Connacht Rugby alive - to keep going to matches that we’d invariably lose, but at least we had a team, we had a dream and a hope that one day we would be more than makeweights.

That day arrives today, and the whole province is behind our team!