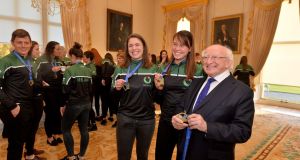 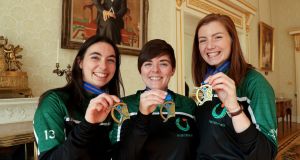 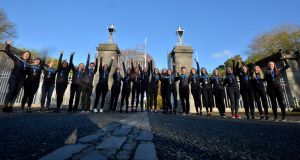 A win by the Ireland women’s team in the European Ultimate Frisbee Championships last summer was welcomed with a congratulatory tweet by President Michael D Higgins, and on Friday he made good his promise to invite the victorious team to Áras an Uachtaráin.

In July the Ireland women’s team beat Switzerland 15-8 to win gold in the 2019 European Ultimate Frisbee Championships (EUC). It was the first time an Irish national team has won gold at an international tournament.

The win came despite the Irish team going into the European championships as only 11th seeds. In the semi-final the team defeated the favourites Russia while playing in temperatures of 37 degrees.

Ultimate frisbee is a cross between tag rugby and American football. It’s a seven-a-side game in which a goal is scored when a player catches the frisbee in the end zone. It’s a non-contact sport, with no referee. At every tournament a spirit prize is awarded to the team applying the rules in a fair, considerate and consistent manner.

There are more than 500 members of the splendidly named Irish Flying Disc Association and there are men’s, women’s and mixed leagues.

On Friday, as the 21-member panel gathered with delight for the event, assistant coach and team member Michelle Leahy said most of them would never have believed they would be invited to the Áras.

“If you told me in a year ago that this was going to happen, I would say you would be absolutely crazy,” she said.

President Higgins said he had been a strong supporter of women’s sport for many years and particularly of the “20x20 if she can’t see it, she can’t be it” campaign, which aims to increase female participation in sport by 20 per cent next year.

However, he added that women’s sport had a way to go before attaining the same level of recognition as men’s sport.

By illustration he contrasted the small crowd that attended the women’s FAI Cup final between Wexford Youths and Peamount United with the crowd of more than 30,000 which attended the men’s final between Dundalk and Shamrock Rovers straight afterwards.

Ms Leahy thanked the president for the reception and said the sport had allowed its participants to make lifelong friendships.

“We are so proud to be representing our country. It’s a community of people that are dedicated and welcoming.”