Postmortem on Nóra Quoirin to continue on Thursday 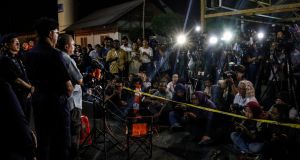 The postmortem on the body of Franco-Irish teenager Nóra Quoirin, which was found in the Malaysian rainforest on Tuesday by hikers, is continuing on Thursday.

Police said they were unable to make any statement about the findings of the examination on Wednesday but said they would update the media later.

During a very brief press conference in front of the forensic medicine department at the Tuanku Ja’afar Hospital in Seremban, deputy police chief for Negeri Sembilan, Che Zakaria Othman, said he could not say how long the postmortem would take.

There was a large media presence throughout the day at the hospital, which the pathologists left at about 9.30pm having arrived some 12 hours earlier.

Nóra’s body was found on Tuesday 2km from the Dusun rainforest resort where she was staying with her parents and two younger siblings. She disappeared on August 4th, the day after the family checked in.

The 15-year-old’s body was found unclothed and next to a stream in an area that had already been covered by the search-and-rescue teams. It was found on the 10th day of the search.

The Quoirin family released a statement via the Lucie Blackman Trust thanking those who participated in the search, local people and “those far and wide” for their prayers and support. They said Nóra had brought people together, especially those from France, Ireland, Britain and Malaysia.

“To all our friends and family at home, we can’t thank you enough for all your love,” they said.

“Nóra is at the heart of our family. She is the truest, most precious girl and we love her infinitely. The cruelty of her being taken away is unbearable. Our hearts are broken. We will always love our Nóra.”

“The family expects the police to do a thorough investigation into the incident, including criminal angles,” Mr Nair said, adding that earlier comment that the family “won’t press for anything” did not mean they opposed a full inquiry.

He urged Malaysian police to accept an offer from French foreign minister Jean-Yves Le Drian to help investigate the circumstances of Nóra’s death.

“It’s a very good proposal,” he said. “I hope police will accept the assistance.”

The Lucie Blackman Trust said on Facebook that neither the trust nor Nóra’s family would be making any further comment at this time.

“We urge an end to speculation, please let the family grieve in peace and the authorities do their job,” the trust said.

Malaysia’s deputy prime minister, Wan Azizah Ismail, said on Twitter that she was “very sad” about Nóra’s death and sent her deepest condolences to her family. “I pray for strength for them to go through this difficult period,” she said. “We believe the police will do their utmost to unravel this tragic death.”

Nóra’s family had, the day before her body was found, offered a reward of 50,000 Malaysian ringgit (about €10,600) for information leading to her return.

It is still not known whether Nóra, who had learning and developmental disabilities that made her especially vulnerable, left the guesthouse alone and voluntarily. Her body was found in a very inaccessible, hilly area.

Her family has said from the outset that they believe Nóra was abducted. Police have not ruled anything out, but have said no evidence of foul play has been found.

Police did find fingerprints on a window that was open in the downstairs living room of the guesthouse where the Quoirin family were staying, but there has been no announcement about the results of forensic examination of those prints.