211 more cases and one further death reported by NPHET 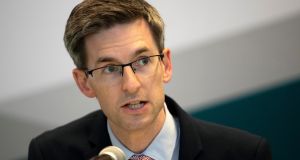 A further 211 confirmed cases of Covid-19 have been notified to the National Public Health Emergency Team (NPHET), including 121 in Dublin.

This brings to 30,571 the total number of cases of the disease in the Republic.

A further one person has died, bringing total fatalities from the virus to 1,781.

Dr Ronan Glynn, acting chief medical officer at the Department of Health, said: “While we are seeing a continued increase in cases, particularly in Dublin, this is at least partly due to the willingness of people to heed our core messages around knowing the symptoms and coming forward promptly for testing.

“This together with all of the other key behaviours will help to break the chains of transmission in our communities.”

“This weekend, please limit your social contacts, especially visitors to your home. Avoid crowds, keep your distance from others and wear a face covering where appropriate.”

Separate figures show parts of Dublin have Covid-19 infection rates two and a half times as high as neighbouring areas in the county.

The data from the Health Protection Surveillance Centre (HPSC) shows the number of cases appearing in Dublin South East - including parts of the south city centre and Dundrum and Ballinteer - are 155 per cent higher than those being found in Dublin South.

The figures cover cases as recorded by the Health Service Executive local health office areas (LHOs), which have been collated by David Higgins, an economist with Carraighill data analysts.

Dublin South East, which stretches from Baggot Street through Rathmines and Ranelagh to Leopardstown and Sandyford, recorded 93.8 Covid-19 case per 100,000 people in the 14 days between August 27th and September 9th.

Meanwhile, Dublin South which comprises of Dun Laoghaire, Stillorgan, Foxrock and down to Loughlinstown, recorded just 36.7 cases of Covid-19 per 100,000 in the same period.

Dublin North-West, which stretches from Cabra to Mulhuddart and includes many recently built areas in west Dublin is another hot spot for the disease with an instance of 83.8 cases of Covid-19 per 100,000.

Of the 211 new cases reported to NPHET, 73 per cent are under 45 years of age and the gender breakdown was close to 50:50 between men and women.

Some 28 per cent are confirmed to be associated with outbreaks or are close contacts of a confirmed case, and 42 cases have been identified as community transmission.

Outside of Dublin, there were 17 cases in Louth, 10 in Limerick, eight in Cork, seven in Westmeath, seven in Wicklow, six in Laois, five in Donegal, five in Galway, and the remaining 24 cases are in Carlow, Clare, Kerry, Kildare, Kilkenny, Leitrim, Longford, Mayo, Meath, Offaly, Roscommon, Tipperary, and Waterford.

Taoiseach Micheál Martin warned against any “knee-jerk” reaction to the growing number of Covid-19 cases in Dublin and said the Government would adopt a structured approach with how to deal with disease in the capital based on advice from the NPHET.

Asked if he would close down Dublin if public health experts advised such a move, Mr Martin said that sort of “approach or language” was not helpful and was not how the Government would approach the issue when the Cabinet meets on Tuesday to discuss NPHET’s advice on Dublin.

Speaking in Clonakilty in West Cork, he said: “We must be resilient. People are fatigued, I understand that, people are fed up with restrictions and they would love to go back to the normality we once experienced but the virus is around for a while and will be around for a while.

“We have got to be clever, we have got to be smart and we have to be resilient in terms of how we deal with it. The overarching objective must be public health but equally to protect livelihoods and keep people working and then have a decent quality of life for our children and our people overall.”

Earlier, Minister for Transport and Green Party leader Eamon Ryan confirmed the Government’s mid-term plan for tackling Covid-19 - to be published next week - would “set up a framework for the next six months”.

A decision on the opening of wet pubs would be made next week once it had been determined what had happened in recent days in relation to numbers, Mr Ryan said.

The Minister also backed the idea of testing for Covid-19 in ports and airports as part of a coordinated approach across Europe.

There is currently no mandatory testing for people arriving into the country from other jurisdictions.

The European Commission said it is seeking a coordinated approach to international travel to enable the same standards across Europe.

The same system would be used to measure the risk in terms of international travel with three different categories : green, amber and red.

Mr Ryan said testing at airports was one of the elements being examined under the Government’s mid-term plan for living with Covid-19.

“What we’ll have to look at next week is whether we adopt that type of European approach. I believe that has real benefits. It gives people in the travel industry the certainty that this is part of a wider European approach - that is the first key decision that we need to make,” he told RTÉ radio’s News at One.

“It will take a couple of weeks for that to be agreed at European level but, because you have to do it at either end of the flight, you do it on a reciprocal basis. Doing it in that way is the right way to go.”

The international travel and tourism sector has been one of the worst hit as a result of the Covid-19 pandemic, with air travel continually decreasing since the Spring.

Official figures show that the number of flights in the EU is close to half what it was a year ago, while in the Republic traffic is down by almost 90 per cent.

Ryanair and Aer Lingus have both been highly critical of the Government’s travel restrictions, with Ryanair executives saying the airline may cut more flights in the Republic if the restrictions remain in place. Aer Lingus is considering moving long-haul aircraft from Shannon to one of six UK regional airports to combat the restrictions.

Statistics from the Central Statistics Office this week showed that the Irish economy contracted by 6.1 per cent between April and June, and that the country is officially in a recession.

On Friday, Minister for Enterprise, Trade and Employment Leo Varadkar warned that Ireland could suffer “multiple economic hits” from Covid-19.

Addressing the annual conference of the Dublin Economic Workshop, the Tánaiste said:“A lot people are talking about what type of recovery we might have, whether it is U-shaped or V-shaped or the Nike tick or even K-shaped.”

However, he said these hypotheses assumed the pandemic would only have one economic hit. “It is more likely that there will be multiple waves,” he said.

Mr Varadkar said the current crisis was not like any previous one and that meant there was no guide for what to expect, which made policy decisions extremely difficult.