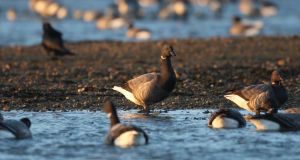 BirdWatch Ireland has expressed concern for thousands of Brent Geese, ducks and wading birds along the east coast after plastic shards were discovered to have travelled via the Irish Sea from Dún Laoghaire to Donabate in north Co Dublin.

The are about the size and shape of a needle and were released into the sea on November 2nd by contractors working on the former Dún Laoghaire Baths site near the harbour.

BirdWatch Ireland and concerned environmentalists have since been reporting discoveries of the material on sites at Killiney Beach, the Forty Foot bathing area, Sandycove and Sandymount, Dollymount Strand, at the Causeway in Clontarf and on Donabate beach.

Concern is mounting after two herons were found dead in Dún Laoghaire harbour and BirdWatch Ireland said the plastic shards could pose a threat to avian life at a critical time of year.

BirdWatch spokesman Niall Hatch said Brent Geese, which are a long-distance migratory species from the high Arctic, winter in northwest Europe, chiefly in Ireland. He said if the shards remain in the water or on the beach they could be eaten by the geese leading to many deaths over the years to come.

Mr Hatch is also worried about ducks and wading birds which forage for food on the seashore at this time of year.

Mr Hatch said reports of sightings of the shards accompanied by photographs had been coming in on BirdWatch Ireland’s’s Facebook page, indicating that the plastic had moved beyond Dublin Bay.

Last week the contractor rebuilding Dun Laoghaire Baths, the Siac/Mantovani partnership, said 70kg of the shards had been released inadvertently and some 50kg had been recovered in a clean-up operation.

Mr Hatch said the organisation wanted to ensure that this does not happen again.

Cathaoirleach of Dún Laoghaire Rathdown County Council Ossian Smyth said he asked on Monday for a detailed explanation from contractor Siac/Mantovani, as to how the shards could have been released. But he had yet to receive it by Monday evening.

Mr Smyth said the council had ordered construction work on the baths to cease and would not be allowing it to proceed until an explanation of how the release happened was forthcoming and “credible” assurances are made that it could not happen again.

“I understand that a number of birds have been found dead and that an autopsy is to be carried out to see what is in their stomachs,” he said. Underwater, air and shoreline assessments have been carried out at the weekend to assess the full extent of the incident.

The council has engaged an independent specialist environmental consultant to assess the impact on sea life and wild life, he said.

The cathaoirleach also said the issue would likely be raised on the agenda of the council meeting scheduled for Monday night.