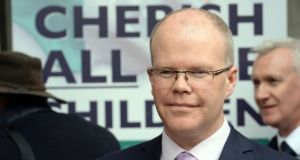 Meath West TD Peadar Tóibín said a notice in a recent parish newsletters asking “pro-life supporters especially” to attend one of his rallies was not ordered by him. Photograph: Cyril Byrne

The former Sinn Féin TD who has established a new party says at least a third of the members joining his organisation are Fianna Fáil supporters.

Peadar Tóibín has also insisted that if his party, called Aontú, is to be consistently labelled as “pro-life” by the media then other parties, such as Labour, should always be referred to as “pro-abortion”.

Mr Tóibín said a notice in a recent parish newsletters asking “pro-life supporters especially” to attend one of his rallies was not ordered by him.

Mr Tóibín is holding a number of meetings around Ireland, the North and South, to build support for Aontú. He said a recent event in Belfast drew a crowd of 250 people, with 200 at another in Limerick. He estimated a similar crowd would attend at meeting in Derry on Thursday.

He also said about 200 people are joining the party every week, adding: “Well over a third of them would be former Fianna Fáil supporters. There is a large number of people who think Micheál Martin is giving them two fingers.”

He also distanced himself from adverts in parish newsletters.

It appeared alongside other notices on planned pilgrimages to Medjugorje and classes on ICT skills for the unemployed.

The Meath West TD said this was not an initiative of anyone senior in his party, but was rather due to the enthusiasm of an individual who received one of his leaflets.

“Someone got a leaflet in the door and rang up and asked for it to be put in the newsletter,” he said. “Obviously the party has a pro-life policy but it has a range of other policies too,” adding that Labour, for example, was “pro-abortion” but had polices on a range of different issues. “But nobody in the media would call the Labour Party a pro-abortion party.”