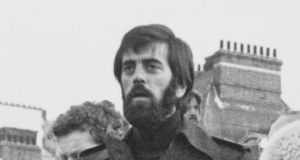 Ciaran McKeown, one of the founder members of the Peace People, has died aged 76.

Mr McKeown died peacefully at his home in Belfast on Sunday following a period of illness, his family said.

Mr McKeown, with Mairead Maguire and Betty Williams, were the founders of the Peace People which campaigned for an end to the Troubles violence, bringing tens of thousands of people to attend rallies to support that aim.

The organisation was formed in 1976 following the deaths of the three children of Annie Maguire, a sister of Mairead. They were killed when struck by a car driven by an IRA member, Danny Lennon on Finaghy Road North, west belfast. He had been fatally wounded by British soldiers who had been chasing him.

His car ran out of control, mounted a footpath and struck Annie Maguire and her three children. They had been out shopping. Joanne (8) and six-week-old Andrew died at the scene while their brother John (2) died the following day from his injuries.

After a lengthy battle with depression over the loss of her children Anne Maguire took her own life in 1980. The following year Mairead married Jackie Maguire, her late sister’s widower.

Mr McKeown, who had been working as a journalist with the Irish Press in Belfast at the time, got involved with Ms Maguire and Ms Williams to campaign for an end to violence.

Ms Maguire and Ms Williams won the Nobel Peace Prize for their work but Mr McKeown was not made a party to the award.

A family statement issued in Belfast on Monday said he became the Peace People’s “chief strategist and sketched out a plan of rallies and marches for peace which saw hundreds of thousands of people take to the streets in Northern Ireland, Dublin, London and elsewhere to call for an end to violence”.

The statement added, “Seeing an opportunity to make a difference, he stepped down from his role as a journalist to devote himself full-time to peace activism, editing the movement’s newspaper, writing the declaration of the Peace People, the movement’s constitution, and numerous pamphlets setting out a strategy of nonviolence, with the view to achieving peace and justice in Northern Ireland and globally.

“The period saw a steep fall in the level of violence in Northern Ireland.”

Mr McKeown was born in Derry in 1943 and raised in Belfast, where he spent most of his life working as a journalist, in addition to time as a student leader, civil rights activist and peace activist.

While studying philosophy at Queen’s University, Belfast in the 1960s, he became involved in student politics and civil rights activism.

In 1966 he became the first person from a Catholic background to be elected president of Queen’s University student representative council after securing cross-community support among the student body. In 1968 he became deputy president of the Union of Students of Ireland and its president the following year.

He was involved with the Peace People for several years and, in 1978, became the first person from Northern Ireland to address the General Assembly of the United Nations when he delivered a speech on behalf of the International Fellowship of Reconciliation.

When the influence of the Peace People began to wane, he found himself out of work. Unable to get work as a journalist he retrained as a typesetter and wrote a book, The Passion of Peace about his life as an activist.

He later returned to journalism working at various times for the Irish News, News Letter and Daily Mirror.

He was predeceased by his wife, Marianne and his sister Maire. He is survived by seven children, Marianne, Rachel, Susan, Simon, Ruth, Leah and Hannah, 17 grandchildren, four brothers and a large extended family circle.