Days before execution by firing squad, dispatch sent to commander of Fourt Courts 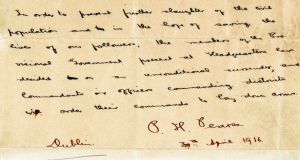 A letter of surrender written by Patrick Pearse on April 30th, 1916 – exactly 100 years ago today – will be auctioned in Dublin with an estimated value of up to €1.5 million.

This is the highest estimate ever assigned to any work of art or historical item offered at auction in Ireland.

Adam’s Auctioneers has described the handwritten, single-page letter as “the most significant Irish document to be offered for sale” .

The letter reads: “‘In order to prevent further slaughter of the civil population and in the hope of saving the lives of our followers, the members of the Provisional Government present at headquarters have decided on an unconditional surrender, and commandants or officers commanding districts will order their commands to lay down arms. P.H.Pearse, Dublin, 30th April 1916. ”

Auctioneer Kieran O’Boyle told The Irish Times that it was “the last official letter Pearse wrote, three days before his execution by firing squad on the morning of May 3rd 1916”.

The auctioneer said the letter is being sold by a private client who bought it from Adam’s at auction 11 years ago for €700,000.

Mr O’Boyle said the man wished to remain anonymous and he declined to identify his nationality or country of residence.

Pearse wrote the letter in his prison cell at Arbour Hill jail, where he was detained after surrendering to the British outside the GPO the previous day, April 29th.

Pearse was, apparently, asked to write the letter to persuade a group of rebels holding out in the Four Courts to surrender. The letter was hand-delivered by a priest, Fr Columbus, a friar in the Capuchin Order, to the rebels.

The commander of the Four Courts ceased hostilities and surrendered after reading it.

The auctioneer said the letter would go under the hammer for the second time in December this year with an estimate of between €1 million and €1.5 million.

The highest price ever achieved at auction for an item of Irish historical memorabilia was for the handwritten first draft of A Soldier’s Song/ Amhrán na bhFiann, the Irish national anthem, signed by author Peadar Kearney. It sold for €760,000 to an anonymous bidder at a 2006 auction organised jointly by Adam’s and Mealy’s auctioneers.

The highest price ever paid for a work of art at auction in Ireland was achieved in 2011, when A Fair Day, Mayo, a painting by Jack B Yeats, was sold at Adam’s for €1 million.

The State is unlikely to bid for the Pearse letter, given the high estimate. The National Museum of Ireland already has two other surrender letters written by Pearse to other garrisons in Dublin.

The official surrender document of the Rising – typed by the British and then signed by Pearse on April 29th, 1916 – is in the Imperial War Museum in London.