Fine Gael is in the driving seat in Leinster House, but its destination remains unclear 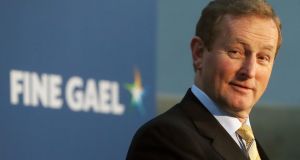 Taoiseach Enda Kenny is due to give a report on the progress of government formation when the Dáil returns next Tuesday. File photograph: Niall Carson/PA Wire

The Dáil returns next Tuesday – yes! for one day only, folks! – when Enda Kenny is due to give a report on the progress of government formation.

At the rate things are going, that won’t detain us all for too long. Still Rome wasn’t built in a day.

Then again, Rome wasn’t built by having loads of meetings with Shane Ross, either. If it was, it would have had more rural Garda stations, and no whip system.

Anyway. You’ll be pleased to hear there are other things on the Dáil’s agenda for next week.

But obviously they are hamstrung by the fact they can’t actually do anything, being caretaker Ministers and all.

Specifically, the debates will enable Sinn Féin and the AAA-PBP to paint in vivid terms the problem of homelessness and demand that someone forms a government to do something about it. But not them, obviously.

After a day demanding that “something must be done”, the Dáil will adjourn for a fortnight, during which the dance of government formation will enter a more kinetic phase before the next vote for Taoiseach on April 6th.

Soundings from Fine Gael and the Technicolor ranks of the Independents and small parties suggest it has established a lead in its bid to win the Indies’ affections.

Enda has even managed to get Barack Obama to visit Cuba tomorrow as a gesture of goodwill to Cuba supporter Señor Finian McGrath.

But Fine Gael is in the driving seat, even if it’s not clear where it is driving to.

Indeed, they may be driving everyone crazy, off the cliff or round the bend, but they are in pole position, which is where this metaphor expires.

Reports last week indicated progress not just with the Independents, but also with the Greens. Yes! The Greens could be on their way back to government. What could possibly go wrong for them?

Leinster House wags were suggesting Enda’s love of cycling might assist in his negotiations with them.

The Taoiseach has been known to don an alarming yellow lycra ensemble and beetle around Kerry.

That must be tough going after a year on the soft seats of the Mercedes, but Enda has an arse like leather, apparently. It might be useful in the coming weeks. A brass neck might also come in handy.

If you want to get on the bus, Gerry, turn up on time

Bejaysus but the craic was only mighty over in Washington, by all accounts.

Once President Obama got his tie right, that is.

Alas and ochón, but the Sinn Féin leader Gerry Adams didn’t witness any of this because he was held up at security outside the White House and missed the hooley.

Gerry later likened his treatment to that of civil rights icon Rosa Parks, who famously refused to give up her seat on a bus in Montgomery, Alabama.

Bejaysus but Sinn Féin will not “sit at the back of the bus for anyone”, Adams said in a statement.

Apparently this sort of thing is not completely unheard of in the (understandably) security- conscious environment in the White House.

Names on lists are often misspelt, or backward American staff put the month before the day in your date of birth (ie 9/11, rather than the 11th of the 9th), or they don’t understand that the name on your passport is the Irish version, or that you’re named after your Uncle Sylvie but actually everyone calls you Mattie, or whatever. So everything has to be rechecked. At tedious length.

This is one of the reasons guests were asked to arrive at 3.30pm at the White House, while the president was not due to speak until 4.30pm.

Top White House sources said there was a long queue at 3.20pm. Adams later said that he arrived a few minutes before the president was due to speak.

Might it have been better to get along a little earlier? It would also have given him more time with the nibbles and free bar.

Other Sinn Féin leaders had no such trouble in gaining admission. So the Rosa Parks analogy only goes so far.

Unless we have all been seriously misled, Rosa’s cousins weren’t all sitting up in the comfy seats at the front.

If it’s going to be hard work for Enda in the coming days, there won’t be a free pass for Fianna Fáil either.

Even the indies and Fine Gael admit that if their talks are successful they will need Fianna Fáil’s co-operation to form a government – co-operation that will have to include commitments on allowing a new government to do budgets, etc.

Sooner or later people will realise there’s a bit of a contradiction between FF saying “we won’t join a coalition with FG because we were elected to get rid of FG” and striking a deal with FG to allow the party to govern in a minority. Or are we being too picky?

Still, perhaps well-known health nut Micheál Martin might be attracted to power by the idea of a sugar tax, announced by the British government this week, and on the agenda here too.

Martin’s habit of eating healthily in the Leinster House restaurant has often been a source of suspicion to his FF colleagues.

One old hand once dismissed him for his fruit and yogurt in the morning.

How could you trust a man that eats a breakfast like that, Old Hand wondered “I do like a big fry in the morning, with nice runny eggs,” he added.

Alas, he has since ascended to the great members’ bar in the sky, while Micheál is still with us, and surrounded by young healthy-eating deputies, too.

Well, Fianna Fáil has changed, in all sorts of ways. We might soon find out exactly how much.

Sinn Féin guests were hob-nobbing at the speaker’s lunch on Capitol Hill earlier in the week.

According to the usual well-placed sources (before they got stuck into the bar, anyway) Northern Ireland’s Deputy First Minister Martin McGuinness sat with Richard Gere, and they got on famously.

An officer and a gentleman, etc. But which was which?

Back at the White House later and the Taoiseach’s private secretary Nick Reddy fell into conversation with Michael Flatley.

The Lord of the Dance posed for a photo with a guest, while the lads made small talk.

“How are the knees, Michael?” Reddy inquired. “Ah, not great, lads, not great!”