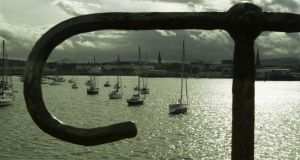 Dún Laoghaire harbour. A P&O cruise ship which anchored off Dún Laoghaire was forced to move to Dublin Port yesterday when one of its passenger tenders got lost in fog in Dublin Bay and its tender licence was then suspended. Photograph: Frank Miller

A P&O cruise ship which anchored off Dún Laoghaire was forced to move to Dublin Port yesterday when one of its passenger tenders got lost in fog in Dublin Bay and its tender licence was then suspended.

The tenders are used to ferry cruise ship passengers to and from shore. But when passengers set out to visit Dún Laoghaire, a thick fog descended, and a Dublin Port pilot boat had to escort one of the tenders safely into the harbour.

It is understood that the tender was off course and was picked up on the port’s vessel traffic system. Dublin Port has pilotage authority for the entire bay, including Dún Laoghaire.

Witnesses say the Oriana had sounded its fog horn.

The passengers in the escorted tender arrived ashore safely.

However, by then the MSO had been informed and took the unusual step of notifying the ship on VHF radio that its tender licence had been suspended and passengers would not be able to return to the cruise ship on these craft.

The ship weighed anchor and moved to Dublin Port.