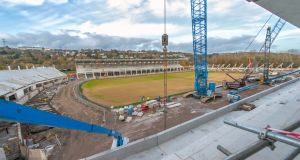 The redevelopment of Páirc Uí Chaoimh is expected to be completed next June at a cost of €80m. Photograph: Michael Mac Sweeney/Provision

World Cup officials have already visited the under-construction stadium with IRFU officials, and Cork GAA officers expect a third visit by the international officials after the 45,000-capacity stadium is completed next June.

“It’s an exciting event for Páirc Uí Chaoimh and Cork to be involved in, and we would welcome any country here if Ireland is successful,” said the chairman of the stadium’s steering committee Bob Ryan.

Former Bord Gáis CEO John Mullins, who is deeply involved in the project, said a World Cup was worth up to €1 billion to a host country, so Cork would be expected to stand to gain a substantial share of that if the Irish bid was successful.

“Cork as a hub venue would host at least four games, so you can imagine the number of fans who would base themselves in Cork – it would be worth tens and tens of millions to the local economy in terms of hotels and bars and restaurants all benefiting.”

The Stadium Business Committee, chaired by Mr Mullins, must find €16 million. Cork GAA will sell naming rights. There will be no corporate boxes but there will be over 2,000 premiums seats costing €6,500 for a 10-year ticket.

Concert promoters’ opinions were sought when the stadium was being designed, Mr Mullins said yesterday. It is hoped that it will be a major concert venue, hosting two 47,000-strong concerts each year.

Páirc Uí Chaoimh’s match capacity will rise from 43,500 to 45,000. The original covered 9,000-seater South Stand is being replaced by a three-tier stand holding 13,000, including the premium ticket-holders.

The 9,000-seat uncovered North Stand is also being redeveloped. Its capacity will fall to 8,000 and it will be covered. The City and Blackrock End terraces will be upgraded and will continue to hold 12,000 fans each.

Cork GAA visited Croke Park, the Aviva, Thomond Park, Ravenhill, Twickenham and Stamford Bridge during planning. “We picked what we thought was the best in each,” said Cork County Board secretary Frank Murphy. “We are very happy with the result. It is certainly on a par with anything that’s available within these two islands.”