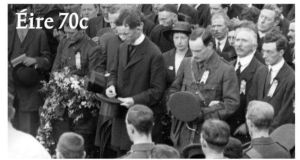 An Post have launched a new 70c stamp to mark the centenary of Pádraig Pearse’s graveside oration at the funeral of Jeremiah O’Donovan Rossa.

The stamp was unveiled Thursday morning in Rosscarberry,Co Cork, the birthplace of O’Donovan Rossa, by his great-grandson John Whelpley.

A photograph of Pearse at the graveside, taken from the National Library’s Keogh Collection, is used on the stamp. It was designed by Red&Grey Design.

Pearse’s speech, made on August 1st, 1915, at the funeral of the Fenian and senior Irish Republican Brotherhood member in Glasnevin Cemetery, called for the assertion of Irish independence,

The speech helped to raise the profile of the republican movement and is remembered for Pearse’s statement that “Ireland unfree shall never be at peace”.

The stamp is available at main post offices and online at irishstamps.ie