Over 150 objections to €18m cruise berth in Dún Laoghaire

Planned facility for ‘super liners’ in harbour could cause ‘catastrophic failure’, says club 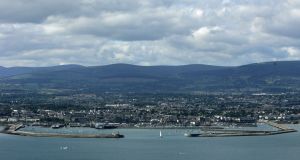 The proposed construction at Dún Laoghaire harbour poses “real and significant risks to the stability of the harbour piers”, according to a submission by Water Wags Sailing Club. Photograph: Frank Miller

Dún Laoghaire Harbour Company’s planned €18 million berth for cruise ships could cause a “catastrophic failure” of the 200-year-old piers because of its “flawed engineering design”, according to one of more than 150 objections to the plan.

The proposed construction poses “real and significant risks to the stability of the harbour piers”, according to a submission by Water Wags Sailing Club, whose members include engineers with marine experience. An Bord Pleanála is due to open a preliminary meeting next Wednesday, with a full oral hearing on October 14th, into the strategic infrastructure planning application. It was submitted by the Dún Laoghaire Harbour Company in a bid to regenerate the port following the loss of the HSS Stena car ferry link earlier this year.

The Dún Laoghaire plan involves building a 435-metre pier with an underpass to cater for the passage of club launches. It also involves dredging an access channel from outside the harbour to St Michael’s Pier, including a 500m diameter turning circle outside the harbour mouth, and providing a shared-use public and pedestrian zone beside the existing marina and connecting to the marina eastern breakwater.

Water Wags said it drew on marine engineering expertise. “If built as designed, the proposed berth facility has the potential to cause a catastrophic failure of the harbour structure.” It said the applicant had failed to make an economic case for the development, and it believed the harbour company had no ability to fund it from its own resources, meaning State funding would “inevitably be required”.

How a super cruise liner would look in Dún Laoghaire

Independent councillor Victor Boyhan has said it would be “premature and unwarranted to pursue the construction”, given the competition from Dublin Port, the impact of dredging 710,000 cubic metres of material from the seabed, the impact of proposed infilling and the potential impact of construction on the harbour walls and accommodation walk.

Dún Laoghaire Combined Clubs said the plan “effectively severs the harbour in two” and “by virtue of the size, scale and operational requirements of the vessels would be incompatible with and undermine the existing use of the harbour” and make it unsafe for recreational use.

“The berthing of the supercruise liner in the harbour represents a structure the mass and bulk of which exceeds the scale of any comparable structure within the town centre of Dún Laoghaire,” the group said in its submission. Ships similar in size to Liberty Hall would dwarf Dún Laoghaire’s town hall and library.

“The presence of the ships within the harbour over the course of the entire day would transform completely the character of the open amenity views across the water, transforming it into an industrial dock-like area – such as at Dublin Port – while obstructing the views of the two lighthouses, which create such a unified symmetry within the harbour and a significant landmark and a strong sense of identity,” it said.

Dún Laoghaire Harbour Company, which was not available for comment yesterday, said the plan would put Dún Laoghaire in a “prime position to attract cruise business”. It said it had been mandated by the Government to exploit its potential as a marine leisure facility.

It said when cruise liners visited Dún Laoghaire, the harbour had to provide tendering services in order to bring passengers to land. This was a “cumbersome approach, and a negative factor for many cruise operators”.