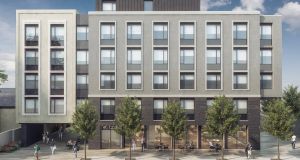 Residents objecting to a five-storey, 208-room co-living housing block in Dún Laoghaire have described the plans by the developers as “callous”.

An Bord Pleanála has approved plans for the complex, which is being developed by Bartra Capital Property Group.

Rooms measuring 16.5 sq m will include en-suite bathrooms and kitchens, at a rental cost of €1, 300 per month.

Protestors, led by People Before Profit TD Richard Boyd Barrett, gathered outside a former school house on Eblana Avenue on Wednesday to oppose the development, saying it will not meet local demands for affordable housing. An online petition opposing it gathered 800 signatures in one day.

The development has been approved under the Strategic Housing Development scheme, where applications for large-scale housing developments are accelerated for decision directly to An Bord Pleanála.

Criticising the use of the Strategic Housing Development Scheme, Mr Boyd Barrett said the Government is encouraging “the building of housing that nobody can afford”, adding that the co-living units are “modern tenements”.

Co-living apartment blocks, which are increasingly common in London and other major cities, are similar to bed-sits, where people have private bedrooms and bathroom, but share common spaces, such as kitchens.

Saying such buildings should be “completely outlawed”, the Dún Laoghaire TD said the local community is suffering from rising rents because of its location and popularity.

“Investors target the district because they know they can command premium prices.”

Samantha Moylan, a shop assistant at home ware store Meadows & Byrne, said: “It will benefit students and people coming up from the county but it’s not ideal and it won’t help families.”

Niamh Mallin, a local resident signing the People Before Profit petition, said “there is a huge need for affordable housing”, and described the “commodification” of the town as “callous”.

A local business owner, who opened a shop on George’s Street last year, described the decision as a blow for businesses in the area. “Dún Laoghaire needs people working in the town who will invest money in the centre,” she said.

She added that the units are unlikely to be filled, predicting “it’s not going to work because it’s not what we need.”

In a statement, Bartra Capital defended the scheme and praised the decision by An Bord Pleanála.

“The board recognise that there is a place for co-living within the Irish housing market and we look forward to delivering this new and innovative form of accommodation,” chief executive Mike Flannery said.

The statement said Ireland “needs new models of housing to cater for changing demographics, living habits and employment patterns. Co-living is one such response to these changes.”

In its Vacant Homes Action Plan 2017-2020, Dún Laoghaire-Rathdown County Council said demand for social housing far outreaches supply in the area. “As a result there are almost 5000 people on the social housing support list,” it said.

“Due to the very high rental income that can be achieved in the private residential sector in the dlr area and the high demand there are very few vacant properties available for rent in this administrative area.”

Minister for Housing Eoghan Murphy has come under criticism in recent weeks for describing co-living as “exciting” and saying young people would “sacrifice less space for less rent”.

In one interview, he drew a comparison between co-living spaces and a “very trendy, kind of boutique hotel type place”.

He subsequently issued a statement in which he said the comparison “wasn’t a good one”.