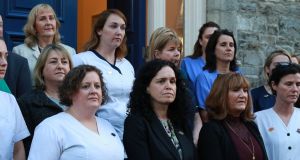 Strikes by nurses appear set to go ahead from the end of the month after talks broke down on Friday without resolution.

Negotiations between the Irish Nurses and Midwives Organisation (INMO ) and the group that oversees compliance with the current public service agreement did not lead to any breakthrough in the current dispute.

Members of the INMO are set to stage the first of six 24-hour strikes on January 30th.

The Psychiatric Nurses Association, which is also planning work stoppages in the weeks ahead, did not attend the talks as it said its executive committee had a previously-scheduled meeting.

Nurses argue medical staff such as physiotherapists receive about €7,000 more each year for a shorter working week.The Government has argued the nurses’ pay demands would cost €300 million, and lead to knock-on claims by other public service groups. It believes this could undermine the existing public service pay agreement.

The oversight body is made up of representatives of public service management and of the public service committee of the Irish Congress of Trade Unions. It is chaired by an official of the Workplace Relations Commission.

Speaking after the meeting, INMO general secretary Phil Ní Sheaghdha said there had been a “very frank exchange of views” at the meeting, and talks would resume on Monday. “It was a beginning. In the meantime we prepare for our dispute which is 12 days away.”

Separately, three teachers’s unions – the INTO, ASTI and TUI – also met the oversight group on Friday.

The unions are unhappy with Government proposals last autumn that addressed lower pay rates for staff recruited after 2011.

These proposals centred on provisions to allow those on lower pay rates to catch up with longer-serving colleagues by jumping two increments on their pay scale over a number of years.

The Government estimated the initiative would cost nearly €200 million by the time it was completed in 2026.