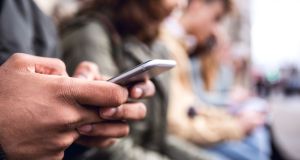 The number of children referred to the Garda youth diversion programme for possession of child abuse material, also known as child pornography, almost trebled last year to 59 from 21 in 2016, official figures reveal.

The annual report of the committee that monitors the Garda programme, which offers young people who accept responsibility for their offending the opportunity to accept a caution instead of going to court, was published this week.

Of the 59 referrals, 18 involved the illegal possession or distribution of images of children in the context of the abuse and exploitation of children, as provided for by the Child Trafficking and Pornography Act 1998.

A further nine referrals related to images being accessed on social media or recorded without consent of the person in the image and then forwarded to others as a joke or as a part of an incident of bullying, the report said.

“They were actions taken by children not aware that their actions constitute offences contrary to the Child Trafficking and Pornography Act 1998.”

“Where the sharing of images was not consensual, it occurred with the motivation of carrying out a prank or cyber bullying and always involved sharing images of people that are the same age as themselves,” the report added.

It says the increase in the referrals and the circumstances surrounding them highlighted the need for “appropriate modernised legislation to be enacted which addresses the behaviour outlined. . . rather than children being referred for the offence of possession/distribution of child pornography”.

“This piece of legislation was enacted in 1998 for the purpose of addressing the exploitation and abuse of children, and before the emergence of smartphones and social media,” the report says.

“It also highlights the need for educating children about their behaviour and safety online and increasing awareness that the sharing of images of themselves or their peers who are under 18 years of age is a criminal offence under current legislation.”

There were 335 referrals under the categories of “sexual assault not aggravated”, “rape of a male or female” and “defilement of a person under 17 and under 15”.

The offence of defilement of a person under 17 and under 15 accounted for 47 of the 335 referrals. Thirty of those involved circumstances where the offender and the injured party were in a relationship and made the decision to engage in sexual behaviour.

“In nine cases, the incident came to the attention of gardaí due to pregnancy and a subsequent report to gardaí by Tusla (the Child and Family Agency).

“In many cases, both parties were not aware that by engaging in such behaviour, the male was committing a criminal offence,” the report said.

“Similar to the issues surrounding the sharing of sexual images with their peers, the fact that 30 out of 47 referrals for the offence of defilement involved sexual behaviour between children of similar age involved in a relationship highlights the need for further education of children in relation to engaging in sexual behaviour before both parties have reached 17 years of age and how such behaviour can constitute a criminal offence.”

Chairman of the committee, assistant commissioner Pat Leahy, said the diversion programme provided “a unique opportunity to An Garda Síochána to engage with young people and provide guidance and support to them in addressing their behaviour and making positive choices”.

Four additional (temporary) Garda staff have joined the Garda Youth Diversion Office team and a full-time inspector had also been appointed. However, the unit remained “under-resourced” to adequately support the administration of the diversion programme, the report said.