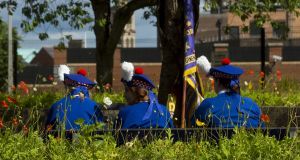 Members of the Royal Black Preceptory in the sea side town of Bangor in Co Down: the North Down constituency voted by 52-48 per cent in favour of staying in the European Union. Photograph: Mark Marlow/Pacemaker Press

When Britain voted for Brexit, a strange thing happened in North Down. This is a unionist-dominated area of Northern Ireland, with many of its people among the most affluent in the region whose founding political principle is their British identity.

Yet as the results came in it was clear the North Down constituency had other affinities: European. The area voted by 52-48 per cent in favour of staying in the European Union. Overall, Northern Ireland voted 56-44 to stay in the EU.

The result triggered a summer of speculation. Had attitudes changed? If unionists saw EU membership as important, might they not reconsider their ancient hostility towards a reunification with Ireland?

In the immediate aftermath there was a flurry of speculation. Should there be a “Border poll”, which would offer another Remain or Leave referendum – this time on whether Northern Ireland should stay in the United Kingdom or unite with the Republic? And would there be a majority in Northern Ireland in favour of Irish reunification?

Moreover, would a push by Scotland towards independence fatally undermine unionist confidence in the unity of the UK?

But passions quickly cooled. Sober politicians, among them former taoiseach Bertie Ahern, said the time was not right for a reunification vote.

And in unionist strongholds, voters are quick to stress that pro-Remain is not the same as a pro-reunification, although even the most die-hard pro-British loyalists say they are totally opposed to any “hard Border” with the Republic following Brexit. They too want good North-South access and good relations to continue with their southern neighbours.

In the North Down seaside town of Bangor, at her home overlooking the mouth of Belfast Lough towards the Irish Sea, pro-Remain voter Jill McGimpsey said she never once thought about giving up on the UK even after Brexit.

The 56-year-old local estate agent said: “The reason I voted to remain was because of all the economic warnings over a possible downturn in business if we left the EU. For me that meant the impact on the local housing market and fear that it would be adversely affected.

“Yet over the last four months I have only witnessed one person pull out of a house sale here in Bangor. This guy was from Poland and he was uncertain about if he could continue to work in Northern Ireland after Brexit. He was the only one that pulled out of a sale. I think now that the doom-and-gloom merchants were wrong.”

Ms McGimpsey stressed that the EU referendum for her had no impact on her pro-union politics. “I never thought for one minute after the UK overall voted for Brexit that I would change my mind about Northern Ireland’s constitutional status. Brexit was and is irrelevant when it comes to my Britishness.”

She, like her pro-Brexit neighbour Carl McLean, stressed though that they were opposed to any imposition of a “hard Border” between Northern Ireland and the Republic – the UK’s only land frontier with an EU state once article 50 of the Lisbon Treaty is triggered in the spring.

Mr McLean, who had just returned from Brussels on business, said: “Unionists as well as nationalists enjoy the benefits of an invisible border and cross-Border co-operation. We don’t want to be stopped at checkpoints or have our vehicles held up at customs posts.

“It might come as a surprise to some people on the mainland but we unionists like travelling and doing business down south in the Republic. Many of us commute there on a daily basis, spend weekend breaks in the South and watch Ireland in the rugby internationals in Dublin. We would hate a ‘hard Border’ as much as any nationalist would.”

The 37-year-old tax adviser admitted that he was concerned in the early days after the Brexit vote over Scotland’s relationship with the rest of the UK.

“Since we all learned about the collapsing oil price and its impact on Scotland’s finances over the late summer I think a lot of unionists over here like me started to calm down a bit. Of course we still fear in the back of our heads that Brexit might fuel a second round of Scottish separatism but cold economics tells me the Scots would think twice about breaking from the UK. My fear over Scotland is receding.”

On Brexit sparking a second Scottish independence referendum, Ms McGimpsey added: “When you consider that Spain would probably block any attempt by an independent Scotland to rejoin the EU because of their opposition to Basque and Catalan separatism, I would hope the Scots would think twice. They could find themselves not only out of the UK but knocking on the door of the EU and not being let in.”

Further west in the equally staunch unionist constituency of Lagan Valley, Scotland was also in the minds of two loyalists who belong to Orange flute bands in the town of Lisburn.

Graham Kenny also voted to remain within the EU, partly due to his sister, who lives in Edinburgh.

Inside the Highwayman Inn in Lisburn, a pub recently taken over by a local community association, Mr Kenny explained why he, unlike most working class Ulster Protestants, voted to stay inside the EU.

“My sister works in a big bank in Edinburgh and was, like many people in the Scottish financial sector, very worried about the impact of Brexit and how jobs might be lost if the UK voted out. She convinced me to vote for Remain.

“There was also the worry about Brexit pushing the Scots towards another referendum vote. Given the family, cultural, political and social ties between Northern Ireland and Scotland the last thing I wanted was to see the Scots walk away from the other union.”

The 43-year-old who is a member of the Ulster Political Research Group – the party that grew out of the loyalist paramilitary Ulster Defence Association – added: “Even if Scotland walked away from the UK, which I think is not going to happen now, Brexit would never push me towards supporting a united Ireland. Our unionism is rock solid,” he said.

His friend and fellow loyalist bandsman Gareth Walker said he voted for Brexit. “I work on a community project here in Lisburn that integrates immigrants into our community. We work on the Old Warren housing estate to ensure our large Polish population feel welcome and fully integrated with the locals.

“In the past we have had lectures and films teaching our young people about how Polish pilots fought in the Battle of Britain to save our country. So for me voting for Brexit was never about being anti-immigration. It was about taking control of our own affairs and not being bossed about by Brussels,” he said.

Although an unapologetic unionist and member of the Lisburn Fusileers loyalist flute band, Mr Walker said he too was opposed to any “hard Border” with the Republic.

“Look, I try to follow the Northern Ireland football team everywhere around Europe and often that means driving to Dublin Airport to get to games abroad. I love the idea of no restrictions on the way down and I like visiting Dublin too.

“I have made friends with Republic of Ireland fans from the South at the airport on our way to games including Euro 2016 in France. The people in the airport from the police to the staff that work there are always very friendly towards us when they see us in our Northern Ireland colours carrying the Red Hand of Ulster flag.

“I want those good relations North and South to continue even though, Brexit or no Brexit, I am still British,” he added.

Recent opinion polls both for the BBC and the Belfast Telegraph bear out the testimonies of unionist voters in North Down and Lagan Valley that Brexit has failed to cause a major shift in favour of a united Ireland.

A BBC poll in September found that eight out of 10 people in a survey of 1,000 voters said Brexit would not change their views on the union with Britain or a united Ireland. The same poll said 63 per cent of voters would still back remaining within the UK. A majority in the same poll – 52 per cent – are opposed to holding a Border poll on Irish unity.

Among those who also opposes a Border poll is Mr Ahern, the three-time taoiseach and Tony Blair’s key ally in the negotiations leading up to the 1998 Belfast Agreement.

The former taoiseach, who built up a deep friendship with the late Rev Ian Paisley in the discussions leading to the establishment of a devolved powersharing government in 2007, said any all-Ireland negotiations about Brexit’s impact should be only under the institutions set up via the agreement.

“That should almost be the gospel. So I don’t think anyone should go off floating other ideas but keep strictly to that agreement which was underpinned by the European Union and is a recognised international treaty.”

One of Northern Ireland’s most respected academic trackers of public opinion and attitude surveys in the region also said the recent polling proved Brexit has not dented unionist support for staying in the UK.

Dr Peter Shirlow of the University of Liverpool said: “Since the 1960s when polls and surveys started more than 80 per cent of the Protestant population of Northern Ireland has been pro-union. That has been a constant in terms of polling ever since including before and after the Troubles.

“The latest opinion poll for the BBC found that 88 per cent of Protestants and a significant section of the Catholic population would still vote to stay in the union, and this was only a few months after the Brexit vote.”