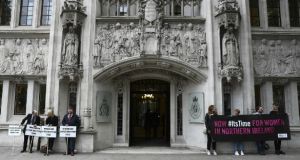 There is a clear need for abortion reform in the North after the Supreme Court found its abortion laws are incompatible with the European Convention on Human Rights, Sinn Féin deputy leader Michelle O’Neill has said.

On Thursday the Supreme Court dismissed an appeal brought by the Northern Ireland Human Rights Commission (NIHRC), after it found the body did not have the legal standing to take the case.

But a majority of judges said the existing law in cases of fatal foetal abnormality, rape and incest was incompatible with human rights law.

Belfast woman Sarah Ewart, supported by Amnesty International, has signalled her intention to pursue a formal declaration the NIHRC was unable to achieve – because of the legal technicality of not being a victim – at the High Court in Belfast.

Ms Ewart has previously shared her story about the trauma caused by having no option other than travel to Brtain for an abortion after being told her baby would not survive.

She said the criminalisation of women must end through the repeal of Sections 58 & 59 of the Offences Against the Person Act 1861.

Ms O’Neill said in the absence of an Assembly, which collapsed in January 2017, the British Irish Intergovernmental Conference should meet as a matter of urgency to deliver on a range of rights and equality issues “including the critical issue of women’s right to appropriate, modern and compassionate health care”.

The DUP describes itself as “a pro-life party” and has said it will continue to oppose any abortion law reform. A formal statement from the party on the Supreme Court outcome has been requested.

In the House of Commons Secretary of State for Northern Ireland Karen Bradley, under pressure from some politicians and campaigners for the UK government to legislate, said her urgent priority was to re-establish the Northern Ireland Executive, as abortion is a devolved matter.

Charities have warn that the UK government cannot ignore what the Supreme Court has said and must bring forward legislation as a matter of urgency.

Ruairi Rowan, senior advocacy officer with the Family Planning Association which has provided non-directive pregnancy choices counselling in the North for more than 30 years said every day its staff see the impact that restrictive abortion law has on women and their families.

Breedagh Hughes, Royal College of Midwives director for Northern Ireland, said it was hoped Thursday’s “landmark decision..will lead to changes that will improve the lives of women in Northern Ireland and the care they receive”.

“This is a fundamental issue about the rights of women which are too often denied the world over,” she said. “Change on this is needed and needed now.”

Liam Gibson from the anti-abortion Society for the Protection of Unborn Children (SPUC) said the Supreme Court case should never had been granted leave.

Dawn McAvoy, co-founder of Both Lives Matter claimed the Supreme Court “has made clear that there is no human right to abortion”.

“On 10 February 2016, the Northern Ireland Assembly voted against legalising abortion in cases of life limiting conditions (sometimes called fatal foetal abnormality) or cases of rape, incest or indecent assault. The Assembly has spoken and the decision of the court today does not change that,” she said.