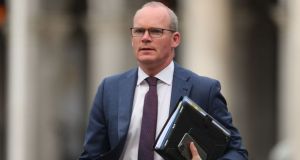 Mr Coveney was speaking at online event, Reflections on the Centenary of the Government of Ireland Act, held by Queen’s University, Belfast. Photograph: Niall Carson/PA

The centenary of the foundation of Northern Ireland is an opportunity to strengthen further the relationships enshrined in the Belfast [Good Friday] Agreement, Minister for Foreign Affairs Simon Coveney has said.

Events marking the anniversary, Mr Coveney said, would bring different perspectives, and he called for an acknowledgement of “our common history” and respect for “diversity of our memories and perspectives.”

“Let us use that deeper understanding and respect to strengthen further the relationships of the Good Friday [Belfast] Agreement,” he said.

Mr Coveney was speaking at online event, Reflections on the Centenary of the Government of Ireland Act, which was held by Queen’s University, Belfast, on Thursday.

There were also contributions from the North’s Secretary of State, Brandon Lewis, and the First and Deputy First Ministers, Arlene Foster and Michelle O’Neill.

The Government of Ireland Act 1920, which came into force in May 1921, partitioned the island of Ireland and created two new entities, Northern Ireland and the Irish Free State, which were to be ruled by Home Rule parliaments in Belfast and Dublin respectively.

The DUP leader, Arlene Foster, said that in 2021 “we will celebrate the achievements and potential of Northern Ireland and its people, we will commemorate the challenges we faced, [and] we must reflect on past decisions that shaped Northern Ireland” in order to “build our vision for the next generations.”

Ms Foster also said next year could be “an opportunity to re-examine the past decisions that shaped Northern Ireland,” giving an example plans to create a common education system. “Is 2021 the time to restart that debate?”

Sinn Féin’s Northern leader, Michelle O’Neill, said that for Irish republicans and nationalists “there will be no celebration of the partition of our country.”

Partition, she said, “rests at the heart of many of our divisions here in the North and between Britain and Ireland,” and Brexit had exposed this and created the “biggest constitutional crisis for unionism in a century.”

Ireland was now entering “a decade of opportunity where the freedom to choose our own future will be decided by the people on this island,” she said, adding that it was now time “to commence a planned transition to Irish reunification and to national reconciliation.”

Mr Coveney said that in the year ahead he wanted to hear stories from all perspectives, including those of women and minority communities on both sides of the border.

The responsibility of political leaders was to ensure the “hospitality for all those narratives” referred to by the President Michael D Higgins, and to “provide a comprehensive, ethical framework within which memory, history and forgiveness can be accommodated,” he said.

“Just because we ourselves do not celebrate an event in history, does not mean we cannot give the room and respect to others for whom it is important.

“Just because we do not share the experience of loss of another tradition, does not mean we cannot give the space and sympathy for those who feel it.

“It is indeed incumbent on us to ensure a hospitality for all those narratives. We lose nothing – not our beliefs, nor our sense of identity, nor our narratives – by doing so.

“If any of us reach the end of next year without having given a respectful hearing to a story or perspective from someone else’s tradition, then I believe we will have fallen short,” he said.

The Northern Secretary, Brandon Lewis, said the UK government had pledged to mark the centenary in an inclusive way, and it would be “an occasion to promote Northern Ireland.”

One hundred years on from the Act, he said, Northern Ireland was “firmly established and greatly valued as part of the United Kingdom”, and the UK government remained “unstintingly committed” to the Belfast Agreement and recognised “the importance of the relationship that it delivers and ensures across these islands both east west and north south.

“The mature relationship that exists between the United Kingdom and Ireland as sovereign and equal friends and partners is one that is vital to the success and prosperity of Northern Ireland as a whole,” he said.