Agriculture minister accused of engaging in ‘scaremongering on steroids’ 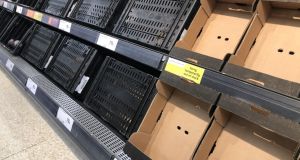 The DUP agriculture Minister Edwin Poots has warned that hospitals and schools risk running out of food due to the implementation of the Northern Ireland protocol.

Mr Poots said on Thursday that after April when full Irish Sea border arrangements are due to be in place suppliers will not be able to provide deliveries to hospitals and schools in Northern Ireland.

These comments were “scaremongering on steroids”, said the Alliance Brexit spokesman Stephen Farry.

With Northern Ireland protocol red tape causing delivery problems from Britain to Northern Ireland the DUP has been engaged in political wrangling with other parties over who is responsible for the disruption.

The DUP, which is urging British prime minister Boris Johnson to override the protocol, has blamed the protocol for the problem while parties such as Sinn Féin, the SDLP and Alliance said accountability rests with the DUP over its support for Brexit.

Mr Poots significantly ratcheted up that quarrel on Thursday when he said suppliers had told him they would not be able to supply hospitals and schools in the North from the start of April.

That will be at the end of a grace period that runs until the end of March which limits the amount of bureaucracy that must apply to goods being transported from Britain to Northern Ireland.

British cabinet minister Michael Gove said this week that the British government was trying to ensure there would be no disruption from April.

“That is a major crisis and I have raised this with Michael Gove,” he told BBC Radio Ulster’s Nolan Show.

“That is an outrageous situation that we in Northern Ireland have been put in as a result of the protocol negotiated between the UK Government and the European Union, ” added Mr Poots.

Alliance North Down MP challenged Mr Poots’s claims. “This is scaremongering on steroids,” he accused.

“There is no prospect that we are going to see a complete collapse of the food supply in Northern Ireland,” he said.

Mr Farry said there may well be some changes in terms of the range and prices of products available from April. “But the notion that there is going to be no food in Northern Ireland, whether it is for the health service or education or people’s households, is complete and utter scaremongering. That is simply not going to happen,” he said.

Sinn Féin South Down MP Chris Hazzard said Mr Poots was “talking up a problem”. “He’s peddling panic needlessly to divert the gaze of angry supporters who are angry at Irish Sea Border,” he tweeted.

SDLP South Belfast MP Claire Hanna said the DUP was “playing with people’s emotions” and trying to create panic when instead, with other parties, it should be seeking to resolve supply problems. “This is where they have brought the people of Northern Ireland, unionists, nationalists and others,” she said.

Former Ulster Unionist Party leader Lord (Reg) Empey said he believed the DUP and Mr Poots were engaging in a “diversionary tactic because they had agreed with Boris Johnson to a regulatory border” in the Irish Sea “and they won’t admit to this”.

“It is the biggest strategic mistake they have ever made,” said Lord Empey.

A health department spokeswoman said it had “not received any reports of major issues related to food shortages or supply difficulties” from Northern Ireland hospitals.

She said it had been confirmed “that there have been some minor delays, and a small number of products have had to be substituted with equivalents, but this is only for a temporary period”.

She said in the event of difficulties it had a “range of contingencies in place such as additional stockholding, use of alternative transit routes or moving to local supply”.

The Department of Education said that at “present we have no indication from our suppliers of disruption to their supply chain that would impact delivery of school meals”.

First Minister Arlene Foster on Thursday evening said that Mr Poots was not saying there was a problem now but that a solution must be found as to what happens when the grace period for trade ends at the beginning of March.