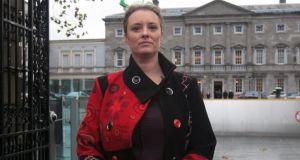 Maíria Cahill outside the Dáil. The North’s DPP Barra McGrory, QC, has apologised to Ms Cahill and two other women over how the PPS dealt with criminal allegations that they were sexually abused by an IRA member. Photograph: Gareth Chaney/Collins

The North’s Director of Public Prosecutions Barra McGrory QC has apologised to Maíria Cahill and two other women over how the Public Prosecution Service (PPS) dealt with criminal allegations that they were sexually abused by an IRA member.

Mr McGrory issued his apology after an independent review by Sir Keir Starmer QC found the three women were “let down by the PPS and counsel”.

A senior counsel, a QC and a junior counsel who were representing the PPS in prosecuting the failed cases have referred themselves to the professional conduct committee of the North’s Bar Council in light of Sir Keir’s findings. They are not being named.

“The PPS let you down, and for that on behalf of the service I want to say sorry,” said Mr McGrory. He apologised directly to Ms Cahill, whom he met on Friday, and said he also planned to apologise directly to the two other alleged victims. Mr McGrory accepted all of Sir Keir’s findings.

Sir Keir, the former attorney general for England and Wales, was called in by Mr McGrory in December to investigate how the PPS dealt with the allegations that Ms Cahill and two other women were sexually abused by IRA member Martin Morris when they were in their teens in the late 1990s.

“Communications with victims and witnesses was variable and at times inadequate. Failures to communicate contributed to a loss of faith (by the three alleged victims) in the PPS conduct and handling of the cases,” said Sir Keir.

The two women, who have anonymity, pulled out of the case against Mr Morris when it was being processed to trial.

Ms Cahill, in addition to the rape charge against Mr Morris, alleged four other IRA members had “interrogated” her about her claims, and that on one occasion she was compelled to face her alleged abuser so that the IRA could test who was telling the truth.

The cases against Morris and against the four alleged IRA members who allegedly questioned her – Padraic Wilson, Seamus Finucane, Agnes McCrory and Briege Wright – effectively collapsed when Ms Cahill withdrew her evidence. All five were acquitted.

Ms Cahill gave a number of reasons for withdrawing from the case, including the length of time – four years – it took to get to trial, “continual adjournments” over the four years, and an alleged prosecution failure to produce intelligence which she believed would have proved her allegations.

Sir Keir said that “given the failings in the case it was almost inevitable” that Ms Cahill and the two other women “would pull out of the process”.

“Each of them was prepared to support their allegations at the outset, but as their cases became increasingly weakened and delayed their willingness to continue understandably diminished,” he said.

“Each case became weaker over time,” added Sir Keir in his 45-page report. “Key witnesses pulled out, evidential leads were not pursued and the strength of having three complainants in the sexual abuse case was lost. There was a failure to reassess the merits of proceeding with each case at a critical point.”

Sir Keir, who was elected as a Labour MP in the recent Westminster elections, said that there was “insufficient planning” in the cases. “This was partly due to an organisational shortcoming in relation to policy and guidance and partly due to a lack of strategic thinking and management by the prosecution team,” he said.

Sir Keir also found that there was “no evidence in the material reviewed to suggest that decisions or actions of members of the prosecution team were improperly motivated”.

Mr McGrory said he took “very seriously the failings identified particularly in the quality and timeliness of the decision-making at key points by senior members of this prosecution team”.

He added, “I want to take this opportunity to express as Director of Prosecutions a sincere apology to the three victims in these cases. It is clear that our service to them fell far short of the standard that they – and indeed the PPS – would expect.

“And also I want to say, to them and all other victims of sex abuse offences, that I am committed to ensuring that what happened in these cases will not be allowed to happen again.”

Ms Cahill said she felt “relieved” and “vindicated” by the report. She said she was “let down from the get-go”.

“The most disturbing thing for me in all of this is that the person who caused great hurt and trauma not just to me but to his other victims essentially was not prosecuted successfully,” she added.

“And also the other people who caused great hurt by forcing an IRA investigation into it. Had that IRA investigation not happened, we most likely would have been with the police making a criminal complaint long before we did.”

Ms Cahill said had it not been for that IRA investigation, it would have been a “clear cut sexual abuse case”.

She said Sinn Féin should accept the report’s findings and also apologise to her.

Meanwhile, Mr McGrory rejected any suggestions that he should resign over the case.

“I have given my commitment to the victims in these cases and to the staff in the PPS that I will be seeing through the changes that have already begun, along with those that will be implemented shortly,” he said.

“My record is one of dealing decisively and effectively with issues as they are identified to me.

“This includes the commissioning of this independent review, acceptance of its findings and the taking forward of its recommendations,” he added.