North inner city has much to be positive about despite ‘dark day’, says Minister 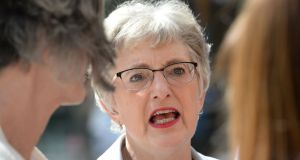 Wednesday’s murder in Dublin’s north inner city meant it was “a dark day” for the community but it was important to remember all that was good about the area, Minister for Public Expenditure Paschal Donohoe has said.

Speaking at the launch of a report on young people’s views on the future of the area, Mr Donohoe said some residents were grieving following the gun murder of Michael Keogh and that others were feeling “very worried and very anxious”.

“This is despite the brilliant work of An Garda Síochána over the last year. On a day such as this, it’s particularly incumbent on us to remember all that’s really good while conscious that there’s so much more we want to do,” the Minister, a local TD, said.

Mr Donohoe and Minister for Children and Youth Affairs Katherine Zappone were launching the Building Hope for Brighter Futures report on young people’s voices in the northeast inner city at the National College of Ireland in Dublin’s docklands.

The Government established a taskforce last year to support the community following a spate of gangland murders. The Early Learning Initiative at National College of Ireland undertook the report as part of that process.

Some 285 local children aged four to 12 and 110 young people aged over 12 took part in the process, which produced a report indicating that they want their voices to be heard by adults, both locally and at policy level.

In particular, they said, they wanted the “important people” to hear their stories. While young people emphasised positive aspects of their lives, such as community spirit, mutual respect among residents and local afterschool and youth services, the areas they want to see tackled included drug problems, homelessness, broken facilities and violence.

“To make things better, you could, to make everybody happy, don’t rob cars, or selling drugs and all that,” was one comment in the report from an 11-year-old boy living in Rutland Street. “When I’m playing out I can see it. I just ignore it.”

A young man aged 19, living in Buckingham Street, is quoted as saying that “all the negative things make the news. I think you need some people trying to spread positivity around. Trying to educate others to make positive decisions … having ambition is one of the essential bits. Young people can change things”.

Ms Zappone also acknowledged the grief in the community, but said that processes such as the one which produced the report allowed people “to live the hope, to have the resilience and the imagination to turn the words of the report into the actions young people wanted to see in their community.

She praised the spirit of local people, who she said “hold hope in the most difficult circumstances”.