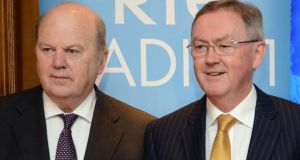 Minister for Finance Michael Noonan (left) and Sean O’Rourke. Mr Noonan accused RTÉ presenter Sean O’Rourke of “scraping the barrel” in his line of questioning about the disclosure of information in relation to Siteserv. File Photograph: Eric Luke/The Irish Times

Minister for Finance Michael Noonan has accused RTÉ of failing to disclose two reports on its future which were commissioned in 2013 by the Department of Communications and completed last year.

RTÉ said the claim was incorrect and that the reports, which it pointed out were not its to disclose, had been published last week by Minister for Communications Alex White.

Mr Noonan made the allegation during an angry exchange with presenter Seán O’Rourke on RTÉ Radio One on Wednesday.

Responding to suggestions by Mr O’Rourke that he had been less than forthcoming with information about the controversy surrounding the sale of Siteserv by IBRC, Mr Noonan said: “Ah now, you’re really scraping the bottom of the barrel with that one when you are talking like that. Get off the stage.

“RTÉ isn’t great at disclosure. You’re sitting on reports for 12 months which you haven’t published yet about the future of RTÉ.”

The claim was immediately refuted by RTÉ which stated that the report was published last week and it was not RTÉ’s to publish in the first place.

“These were commissioned by Govt & publication a matter for Govt, not RTÉ,” the broadcaster said on its Twitter account.

The Department of Finance said it was not making further any comment on the matter.

An RTÉ efficiency review and a report on the broadcasting advertising market have been published by Minister for Communications Alex White. The report was commissioned by semi-state consultants NewERA in 2013.

Mr O’Rourke questioned the Minister about the circumstances in which independent TD Catherine Murphy needed to submit 19 Freedom of Information request to get the necessary information on Siteserv. Mr Noonan denied not being upfront through Dáil questions.

Mr O’Rourke pointed out to him that Mr Justice Hamilton had suggested many years ago that, if TDs could get answers to questions through the Dáil, there would have been no need for the Beef Tribunal.

“Is there not a mindset going back to your days as minister for justice, tell them nothing,” Mr O’Rourke suggested to him. It was then that Mr Noonan alleged that RTÉ was sitting on a report about its own future.

Mr O’Rourke responded by suggesting that he knew nothing about any of these reports and said it was clear that Mr Noonan regarded “attack as the best form of defence”.

Mr Noonan said the files that were disclosed through an FOI were background information that did not add to the store of knowledge about the Siteserv sale by the Irish Bank Resolution Corporation (IBRC).

“When the proper procedure was envoked, the freedom of information requests were given out,” he said.