No Markle debacle for Cork fishmonger with grá for Meghan 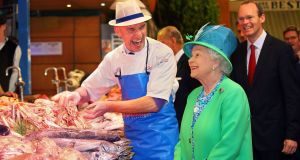 Fishmonger Pat O’Connell, who was famously pictured laughing with Queen Elizabeth II on her visit to the English Market in Cork in 2011, says there is huge interest in the Royal wedding in Leeside.

O’Connell, who is a former president of the Cork Business Association, says everybody is talking about the nuptials of Prince Harry and Meghan Markle in London on Saturday. He insists that even the cynics will end up having a sneaky glance at the television during the day.

Customers have even joked with him about walking the bride, whose father is recovering from heart surgery, up the aisle for her big day. “They are saying to me, ‘there is no one to walk her up the aisle. Will you do it?’ ” But as it happens Prince Charles has come to the rescue and will walk Meghan down the aisle on Saturday.

The visit of the queen was absolutely huge for Cork, he said.

“Cork has a real sense of character and if anywhere was going to make the queen laugh it was Cork. People really seem to like Harry. They wish the couple well. And they will all be wondering what sort of dress it is.”

I will be watching because I love fashion

Meanwhile, Joseph Byrne who owns a hair salon in Glasheen on the southside of Cork, said he has been inundated with customers getting ready for royal-themed tea parties and Prosecco mornings in their homes.

“I will be watching because I love fashion. As a hairdresser I love looking at the hair. We are living in a dark age at the moment. Who wouldn’t want a bit of escapism?” says Byrne, who was interviewed on Sky News when the queen visited Cork.

“It is part history and part fantasy. Meghan is a mature woman who is very capable and is marrying for love. She has been through the ringer like the rest of us and now she has met someone she loves and he just happens to be Prince Harry.”

His salon will be open tomorrow but Byrne will be at home soaking up the special occasion. He plans to have a champagne breakfast and is looking forward to all the pomp and “carry on” before the wedding gets under way. “Being taken off in a glass carriage – who wouldn’t love that? You can forget about everything and live in this little world for a while.”

He has grown up and become a man

Meanwhile, the Metropole Hotel in Cork city is expecting 60 guests for a royal wedding tea party on Saturday.

Niamh Hester of weddingdates.ie, which is organising the event, said they couldn’t keep up with demand for tickets. “It really took off. We are delighted. I think it will be mothers and daughters. But it will be all ages really.”

Peter Kelly of Weddings By Franc, told Cork’s 96FM, that the fashion on display will lead the trends for the next few years. He said Princess Diana was a “global icon” and that naturally there was interest in the marriage of her son.

“He has grown up and become a man and now he is marrying another lady who is another style icon. There is a huge fascination with royalty. It is probably going to be one of the biggest weddings of the year,” he said.