No criminal charges over death of girl (14) on scouting trip 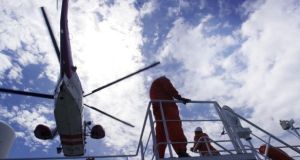 Aoife Winterlich (14) was swept into the sea off Hook Head in Wexford last December and again fell into the sea as rescuers attempted to bring on her board the Irish Coast Guard helicopter. She died in hospital five days later. File image: Bryan O’Brien.

No criminal charges will be brought in relation to the death of a 14-year-old girl scout from Dublin.

Aoife Winterlich, from Walkinstown, Dublin 12, died after being swept into the sea off Hook Head in Co Wexford on a weekend scouting trip with the 55th South Circular Road group.

At 2pm on December 6th, 2015 four young people were swept into the sea during a heavy swell in the aftermath of Storm Desmond.

Two of the four made it back to shore, while two were winched to safety by the Irish Coast Guard Waterford based helicopter.

Aoife again fell into the sea as rescuers attempted to bring on her board the Irish Coast Guard helicopter.

She was immediately recovered from the sea and both teenagers were flown to hospital, arriving within 17 minutes of the initial call out. However, she died on December 11th last at Our Lady’s Children’s Hospital in Crumlin.

Gardaí in New Ross investigated the incident - examining photos, maps, emergency rescue reports and CCTV footage - in their preparation of a file for the Director of Public Prosecutions (DPP). A file was submitted to the DPP in August.