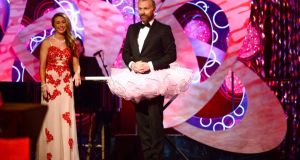 It was a night of notable firsts. Ever the sport, host Dáithí Ó Sé, who wore a tutu at one stage, took part in a dung spitting competition with the Queensland Rose Niamh Healy.

The definition of a talent has been stretched to include the ability to recite the 32 counties of Ireland in less than 10 seconds. Darwin Rose Caitríona Brennan managed it in eight.

Maggie Feu, the New Zealand Rose, recited a poem she composed herself entitled The Irish Kiwi in which she praised the fecundity of the Irish in the New World. “We breed like rabbits”.

The Derry Rose Eiméar Anderson harbours an ambition to be a “full-time Disney princess as my first calling in life. This is as close as it will ever be.”

Elysha Brennan (22) became the very first Meath Rose to make it to the Dome in the Tralee.

She had an extraordinary tale to tell. She was diagnosed with Hodgkin’s Lymphoma while repeating her Leaving Cert. It was like being “hit by a double decker bus”, she recalled.

“First thought that came into my head is ‘I’m going to die’.” You could feel the air momentarily being sucked out of the Dome in Tralee.

She is now studying to be a doctor going into third year at the Royal College of Surgeons. “I’m happy, healthy and safe,” she said to much cheering.

Dubai Rose Marie Ryan (25), originally from Borrisoleigh, Co Tipperary, spoke of her sister Louise who died by suicide 10 years ago.

She too put some gravitas into the usual light-hearted banter by making a heartfelt plea for consideration for those suffering from a mental illness.

“It’s okay not to feel okay,” she said. She also praised the work that Pieta House does in suicide prevention.

Megan Swart (18), the youngest ever Rose to take part in the Rose of Tralee International Festival, belied her young years with a confident performance.

On Monday, she received an offer to study international hospitality at Dublin Institute of Technology.

She was coy about the amount of points she got. “I’ll tell you Dáithí, if you tell me.” He got 700 points, he offered with a pregnant pause, “because I did it twice and that’s no word of a lie.”

There was also high ambition mixed with low farce – sometimes among the same finalists.

The Cork Rose has a degree in human nutrition and is studying for a PhD. She met her boyfriend in Copper Face Jacks.

Lauren Waller, the Southern California Rose, is studying for a degree in pure arts, but took part in X Factor. “I didn’t get past the first round”.

The Longford Rose Daphne Howard had one of the most popular party pieces of the night with a piano solo.

But the Boston Rose Sarah Hogan, a part-time actress, brought the house down with her version of Guns N’Roses’ Sweet Child of Mine.

Naked woman removed from Treasury Building in Dublin 21:01
Sinn Féin member resigns amid claims party is trying to ‘silence’ her 21:05
Garda launches coastal operation in Sligo and Leitrim to tackle crime 20:16
Gaiety Theatre projectors to be auctioned off next week 20:05
Early batch of child flu vaccine to expire within weeks after poor uptake 19:24