NI Executive advises against travel to Republic and Great Britain 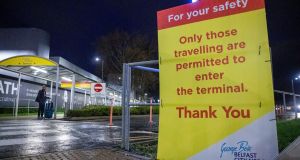 A sign at George Best Belfast City Airport advising that only those travelling are permitted to enter the terminal. Photograph: Liam McBurney/PA Wire

The North’s Executive has rejected an immediate ban on travel from Great Britain amid concerns over a new, more virulent strain of Covid-19 in England.

Instead ministers voted to issue immediate guidance advising against all but essential travel between Great Britain and Northern Ireland, and between the North and the Republic.

Anyone who arrives into Northern Ireland will also be advised to self-isolate for 10 days.

The decision was made following an emergency meeting of the Executive on Monday night.

Minister for Health Robin Swann said on social media following the meeting that “more work was needed on the option of [A]legal travel ban, both legally and logistically - vital supplies to NI and essential travel need to be protected.”

It is understood a proposal by Sinn Féin for a temporary ban on travel from Great Britain was defeated during the meeting. It was supported by the SDLP but opposed by the DUP, Ulster Unionist Party and Alliance.

After that was rejected, ministers then agreed to the proposals put forward in a paper from Mr Swann - which were drawn up following advice from the North’s Attorney General - without the need for a formal vote.

Ahead of the executive convening, Sinn Féin finance minister Conor Murphy wrote to Mr Swann expressing “dismay and astonishment” that he was not moving immediately to instigate a ban on travel between Northern Ireland and Great Britain.