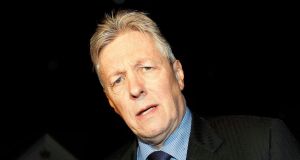 
The Northern Assembly has been recalled tomorrow for a special emergency meeting to discuss the political “crisis” over the issue of immunity for republican “on-the-runs”, First Minister Peter Robinson has announced.

After first threatening to resign if a judicial review was not held into the issue, Mr Robinson ratcheted up the political temperature by having the Assembly recalled.

And after meeting Northern Secretary Theresa Villiers for more than an hour at Hillsborough Castle last night, he indicated there could be serious consequences if his demands were not met.

“Before Friday we need to have a fairly clear picture on what the [British] government’s intention is,” he said.

Asked if Northern Ireland was potentially heading for Assembly elections, Mr Robinson said he had “high hopes” his concerns would be met by the British government.

He said he had also learned from sources that as well as immunity, a number of republicans had received the “royal prerogative of mercy”, indicating they were effectively cleared of offences.

“We are not just talking about people whom it is believed police did not have sufficient evidence to make a prosecution stick. That makes it a very serious matter,” he said.

Unionist politicians have reacted with outrage to the revelations, following a London court case, that the British government has granted immunity from prosecution to nearly 200 republican “on-the-runs” (OTRs) over several years.


Anomaly
The deal between the British government and Sinn Féin was struck some time after Tony Blair’s government failed to bring in legislation in 2005 to deal with the “anomaly” of the OTRs. Convicted paramilitaries were released from prison under the Belfast Agreement, but the position of the OTRs – suspects who had not been convicted – remained unclear and Sinn Féin campaigned strongly for them to be guaranteed immunity.

A London court ruled last week that a Donegal man, John Downey, should not be tried for the 1982 Hyde Park bombing in London, in which four soldiers died, when it emerged he was among nearly 200 republicans who received letters from the British government telling them they would not be prosecuted.

Immunity
The immunity scheme continued under the current UK government, which has issued 38 letters guaranteeing republicans they will not be prosecuted. The last known such “comfort letter” was issued in 2012.

Mr Robinson yesterday sought an official inquiry into the matter and also demanded the letters of immunity be rescinded. He called for the names of the 187 republicans to be released and details given about the alleged crimes in which they were involved.

The Northern Secretary is under pressure to mollify Mr Robinson and other unionists and victims’ groups who expressed “outrage” at what unionists say was a secret deal.


Reneging
However, if Mrs Villiers or Mr Cameron move to rescind the commitments, it would inevitably lead to Sinn Féin accusing London of reneging on a deal which would also have the potential to destabilise the Northern Executive and Assembly.

The NIO confirmed the letters issued to OTRs guaranteeing them immunity only related to republicans.

Mr Robinson said if he and former First Minister Rev Ian Paisley had known of the deal they would not have entered the Executive with Sinn Féin.