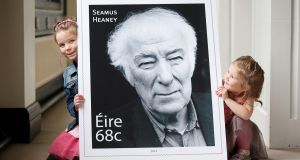 The stamp commemorating the late Séamus Heaney was launched today by An Post.

An Post has announced a new stamp to commemorate the late poet and Nobel laureate Séamus Heaney.

The 68c stamp features a black and white photograph of the poet by John Minihan, while a special first day cover envelope shows an extract from his 1969 poem, Bogland, alongside details from Heaney’s poetry notes.

The poet’s son Michael Heaney said the family was “immensely moved that An Post has chosen to mark Dad’s memory with the issue of this stamp”.

He said the year since Séamus Heaney died had been a sad time for the family, but the stamp was a wonderful testament to the poet’s life and work, as well as “ a reminder of the generosity and support people have shown since Dad’s passing”.

Séamus Heaney was born on April 13th, 1939 in Castledawson, Co Derry. He received a scholarship to attend St Columb’s College in Derry and went on to study English at Queen’s University, Belfast. After his graduation in 1961, he worked as a teacher before becoming a college lecturer.

He made his publishing debut in 1966 with Death of a Naturalist. He went on to publish many more acclaimed collections of poetry including North (1975), Station Island (1984), The Spirit Level (1996) and District and Circle (2006). His translation of the epic poem Beowulf (2000), for which he won the Whitbread Prize, became a best seller.

Over the years, he also became known for his prose writing and work as an editor, as well as serving as a professor at Harvard and Oxford universities. He died on August 30th, 2013.