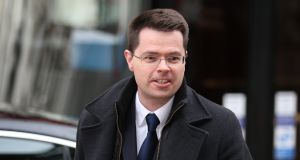 Northern Ireland Secretary James Brokenshire: said the series of day-long visits is part of the Government’s effort to ensure Northern Ireland’s voice is heard in the forthcoming negotiations with the EU. Photograph: Peter Macdiarmid/Getty Images

The Northern Ireland Secretary is to canvass public opinion on the implications of Brexit on a two-week tour of the North.

James Brokenshire, who took up the cabinet post last month, said he hoped to spend the rest of August talking with business representatives, community leaders and politicians.

He said the series of day-long visits is part of the Government’s effort to ensure Northern Ireland’s voice is heard in the forthcoming negotiations with the EU.

The Conservative MP will also hold a number of meetings with groups representing victims and survivors of the Troubles as he prepares for fresh political talks on resolving an impasse over mechanisms to deal with the legacy of Northern Ireland’s turbulent past.

On a visit to the Bushmills Distillery in North Antrim, Mr Brokenshire said: “I have seen first-hand the dynamism, creativity and diversity of Northern Ireland’s businesses and spoken about the UK Government’s priorities here - political stability, economic prosperity and keeping people safe and secure.

“We all want to make a success of the decision by the people of the UK to leave the EU and I want to get alongside people to hear what they think. On behalf of the UK Government I am determined we prepare together for the challenges ahead.

“These visits are an opportunity to listen and learn about the diverse issues faced by people from every part of Northern Ireland. I will also be explaining that the UK Government is committed to working alongside them and the Executive. The UK is a great and strong country with a bright future and Northern Ireland will have a huge part to play.”