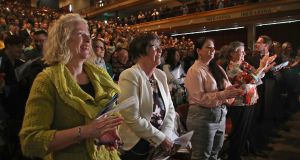 Five thousand people from 135 countries are being sworn in as Irish citizens in six separate ceremonies in Killarney over two days. Photograph: Valerie O’Sullivan

Large-scale citizenship ceremonies in Killarney, Co Kerry, got under way on Monday with a nod to the coronavirus.

The usual neighbourly handshake after the oath of fealty to the State gave way to simple “nodding”, as some 900 people from around 135 countries, at the first of six ceremonies over two days, nodded to their neighbours left and right, and behind and in front, in the INEC venue.

“On such occasions, before threatened with viruses, I would suggest you turn to the new citizens beside you and shake hands. You are not to shake hands today, but you can look at them and nod in their direction,” the presiding officer, retired High Court judge Bryan MacMahon, urged.

The Department of Justice, in consultation with health authorities, had asked candidates and their guests who had returned from a Covid-19-affected region in the past 14 days, or who believed they had symptoms, not to attend.

About 60 people had postponed by Monday morning, and a short ceremony will be held in Killarney in April to accommodate this group, a spokesman said. Exactly how many cancelled because of the virus was not clear, as weather was a factor in some cases.

The 40-minute solemn and simple event began with the Army band’s rendition of the EU anthem, Beethoven’s Ode to Joy, and it ended with the Irish national anthem. Harpist Elaine Hogan played O’Carolan’s Welcome.

In nine years of citizenship ceremonies, more than 120,000 people from 180 countries had become naturalised, Minister for Justice Charlie Flanagan said.

“It’s very remarkable that this tiny island at the edge of western Europe has as its citizens members of every nationality and from every country on this planet,” Mr Flanagan said.

In the red and blue tartan kilt of the Hamilton clan came David Pratt, originally from Edinburgh. Mr Pratt said he had been living in Derry for 10 years and Brexit was one of the factors that prompted him to apply for Irish citizenship.

Many British people gave Brexit as a central reason behind their decision to seek citizenship. Some 45 people travelled from Sligo, among them 80-year-old Lawson Owen Clements, originally from Wales. “I’m very worried about Brexit,” the retired veterinary surgeon said.

Wojcieh Terlecki, from Poland, has lived for 13 years in Sligo, where he has his own wardrobe business. The father of two said Brexit was also a key factor for him.

Anne Mary Moriyama (83), originally from England, has lived in west Cork for almost 20 years. She was congratulated in person by Mr Justice MacMahon. Wearing a green cardigan and beads in honour of the occasion, Ms Moriyama said she had been greatly moved by the ceremony. “I have been quite frustrated I couldn’t vote in referendums,” she added.

Accompanying her was her husband of 46 years, Japanese-born Jerome Moriyama. He wanted to apply, but Japanese law does not allow dual citizenship, Mr Moriyama said.

Loukia Athanasiou from Greece, pregnant with her third child, said she and her husband Kostas, an orthodontist, had been living in Ireland for 11 years. She wore a mask because of the coronavirus. “I am afraid,” she said.

A 33-year-old woman, originally from China, was medically monitored after complaining of feeling unwell in the venue. She was due to attend a ceremony at noon, but her conferring was postponed until the late afternoon while she was attended to.

A spokesman for the Department of Justice said she was provided with food, was accompanied at all times and had access to her phone. Staff were following the advised protocol on dealing with suspected cases of coronavirus, the spokesman said. The woman, who did not wish to be named, said she felt she was held because she was Chinese, but the department has strongly denied this.

There are two days of ceremonies because a backlog has developed due to a legal question over continuous residence.

In November 2019, the Court of Appeal held that the Minister for Justice was entitled to allow for reasonable absences from Ireland. Previously the High Court had found “continuous residence” must mean applicants could not leave Ireland at all during the 12-month period before their application was submitted.