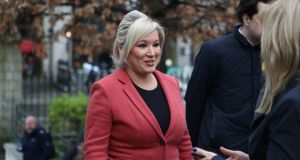 The New IRA is planning an under car bomb attack on a Sinn Féin member, the party’s vice president has claimed.

Michelle O’Neill said she had been advised of the threat by police in Northern Ireland.

It came in response to the pair’s attendance at a Police Service of Northern Ireland recruitment event.

On Monday night, Ms O’Neill indicated that the plot had widened to encompass all Sinn Féin members. She said police had advised that the New IRA was the dissident grouping behind the plan.

“Following the recent launch of a PSNI recruitment campaign, police have told Sinn Féin tonight that persons aligned with the dissident Republican group, the so-called New IRA, plan to attack a Sinn Féin member using an under car explosive device,” she said.

“We have been told this planned attack could happen anywhere in the North.

“This is literally a threat against thousands of Sinn Féin members and their families in the North.

“This is not the first time this particular group have made threats against Sinn Féin members and the PSNI is taking this threat very seriously.

“I am urging the party’s members to be very vigilant at this time.” - PA