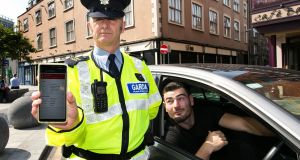 A new mobile app which allows gardaí to access driver and vehicle histories instantly at the roadside, “has the capacity to revolutionise roads policing”, the Road Safety Authority (RSA) has said.

The RSA and gardaí unveiled the new technology at a mid-year review of road safety measures on Thursday.

Assistant Commissioner David Sheehan said the new app would force errant drivers to “end the bluffing” in relation to a range of excuses relating to addresses, penalty point history, vehicle status in relation to tax and NCT and in the near future a vehicle’s insurance status would be discernible via the app.

The “Mobility App” will also allow individual gardaí to process fixed charge notices, cutting down on back office paperwork and allowing gardaí to spend more time in the community, he said.

The app can also add Eircodes to addresses using secure web services. Some 2,000 individual gardaí are to be designated to use the app by the end of this year.

RSA chairwoman Liz O’Donnell said the authority wanted to see every member of the Garda Roads Policing Unit have the app as it “has the capacity to revolutionise roads policing”.

The move is one of a suite of technology and staffing measures being rolled out by An Garda Síochána to combat poor driver behaviour, Mr Sheehan said. The insurance industry was co-operating enthusiastically with the force in developing new databases of uninsured cars, he said. And the data bases will be accessible using the new Mobility app.

Other initiatives include replacing roadside speed cameras with upgraded models and increasing numbers in the Roads Policing Unit from the current level of 707 to 891 by the end of the year, in line with targets in the Road Safety Strategy 2013-2020.