Nazi links and colourful history of Beamish and Crawford 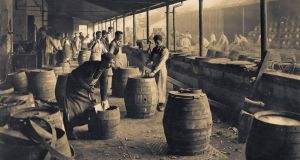 The Beamish and Crawford cooperage in 1900. The brewery was once the biggest in the country, producing more stout than Guinness 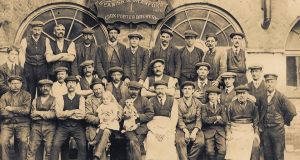 It once was Ireland’s biggest brewery, producing more stout than Guinness and exporting it as far afield as Australia, the United States and the Caribbean.

Now the story of Cork brewery Beamish and Crawford has been chronicled in detail by historian brothers Donal and Diarmuid Ó Drisceoil.

Beamish and Crawford: the History of an Irish Brewery tells not only the story of stout brewing in Cork but the families behind the venture and their interesting offspring, including one Carin Beamish, who married no less a figure than leading Nazi Hermann Goering.

“Carin was the great-great- granddaughter of William Beamish and her mother was Swedish – she met Goering in Sweden in 1920 and they married and settled in Munich, where she joined the Nazi party and she helped Goering escape after the failed Beer Hall putsch,” said Donal.

“She died in Sweden in 1931 from tuberculosis and Goering called his country house outside Berlin Carinhall in her memory,” he added.

“He had her remains exhumed in Sweden and reinterred there in a lavish funeral attended by Hitler.”

The Ó Drisceoil brothers have form in Cork history: they also wrote Serving a City: the Story of Cork’s English Market, and the Beamish and Crawford history is a logical follow-on from their 1997 book The Murphy’s Story: the History of Lady’s Well Brewery, about Cork’s other brewery.

Donal Ó Drisceoil outlined the origins of Beamish and Crawford: “In 1791, two successful merchants, William Beamish from Cork, who had fought in the American wars, and William Crawford, who came from Bangor, Co Down, entered into a partnership with two Cork brewers, Richard Barrett and Digby O’Brien.

“They set up the Cork Porter Brewery on South Main Street and the first porter was brewed there on January 17th, 1792, with the Hibernian Chronicle expressing the hope that “the goodness of the quality we hope will render importation [from London] almost unnecessary”.

Diarmuid Ó Drisceoil said the brewery flourished during the French wars, when Cork was a major provisioning centre for British fleets, and when O’Brien was captured on a merchant ship by the French in 1794 and Barrett withdrew from the business in 1799, Beamish and Crawford took over the brewery.

The book, which is published by the Collins Press, isn’t just a history of the South Main Street brewery, soon to become home to Cork’s Event Centre: it also tells the stories of some of the fascinating members of the Beamish and Crawford families.

The Crawfords were also interesting, with William Sharman Crawford proving a patron of the arts in Cork where the Crawford Art Gallery today bears his name, while both families, although unionist, attended the funerals of martyred lord mayors Tomás Mac Curtain and Terence MacSwiney.

But back to the brewery, and the authors compellingly relate how Beamish and Crawford survived the vicissitudes of the temperance movement, the first World War and the War of Independence before entering on to the international stage again through a series of multinational takeovers.

They conclude with reference to Mike Hannon’s award-winning 2009 elegiac documentary My Beamish Boy, in which one of the former Beamish workers reminisced that the brewery was more than just a workplace or a business but was “the heart of Cork”.