‘It means the world to us’: Search continues for Irish teenager missing in Malaysia

"Mummy's here, love. I know you are there", this is the recording a Malaysian search and rescue team played to look for Nora Quoirin in dense forest reserve, nearly one week after the teen was reported missing. Video: Reuters 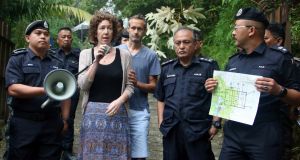 As the search for 15-year-old Irish girl Nóra Quoirin entered its seventh day in Malaysia, the missing girl’s mother thanked search-and-rescue teams for all they have done so far.

Being comforted by her husband Sebastien while she spoke on Saturday, Meabh Quoirin said: “We want to say thank you to each and every one of you. We know you are searching night and day for Nóra.

“We see you working so hard and also praying with us, being with us. We know you have given up your time, especially at a special festival time, to be with us here. It means the world to us and we are so grateful for everything that you are doing for us, everyone here and everyone who is helping who is not here.

“We are extremely impressed with the effort, your expertise, your dedication and we hope you find Nóra, and thank you so much. Terima kasih (thank you).”

This is the first time Maebh has spoken publicly about her daughter’s disappearance. The Lucie Blackman Trust, which supports British nationals in crisis overseas, has been helping the family deal with the media.

Nóra’s father reported her disappearance last Sunday morning when he discovered that she was missing from her room at the Dusun holiday resort, about 63 km south of Kuala Lumpur. The family checked in at the resort last Saturday morning (August 3rd).

About 250 people have been scouring the jungle next to the resort. Extra personnel were drafted in on Friday.

Expert indigenous trackers are involved in the search operation, divers have been scouring the river that runs through the forest, and helicopters and drones equipped with thermal imaging cameras have been deployed. Police said on Friday the search area, which is divided into six one-square-kilometre zones, was being expanded.

Nóra’s photograph is being handed out at roadblocks in the area.

On Friday, Nóra’s family issued a statement, going into great detail about the kind of person she is.

“Nóra is a very special person,” they said. “She is fun, funny, and extremely loving. With her family, she is very affectionate – family is her whole world and she loves to play games, like Cat Bingo, with us. She likes to tell us silly jokes and wear clever, colourful t-shirts. She is not like other teenagers. She is not independent and does not go anywhere alone.”

The family explained that Nóra’s verbal communication is limited. The statement said: “Nóra can read like a young child, but she cannot write more than a few words. She has a good memory, but she cannot understand anything conceptual. She is unable to do maths and so things like money are impossible to manage.”

Nóra’s family explained that she cannot make or receive phone calls independently, that she can wash and dress herself, but cannot manage buttons, and that she struggles to wash her hair. At school, she is learning to ride a bicycle properly.

“Nóra likes to walk with her family, but her balance is limited and she struggles with co-ordination. She has been to Asia, and many European countries before, and has never wandered off or got lost,” her family said.

Nóra’s relatives explained that she was born with holoprosencephaly, which, they say, means that her brain is small. Holoprosencephaly is a rare congenital brain malformation resulting from incomplete separation of the right and left hemispheres.

“All her life she has spent a lot of time in hospital,” Nóra’s family explained in their statement. “When she was born, she needed operations to help her breathing. She has specialists that monitor her growth, her physical abilities and her strength, and especially her mental capacity.

“Nóra has always needed dedicated specialist educational provision, and now attends a school for children and young people with learning and communication difficulties.”

Nóra and other members of her family are bilingual and bicultural, her relatives added in their statement yesterday. “Nóra is very proud that she can speak French as well as English.”

Nóra, her family says, is very sensitive. “Outside the family, Nóra is very shy and can be quite anxious. Every night, her special time is for cuddles and a night-time story with her mum. And she was extremely excited about the family holiday in Malaysia,” the family added.

The deputy police chief for Negeri Sembilan, Che Zakaria Othman, said on Friday that members of the elite 69 Commando unit of the Royal Malaysian Police, also known as VAT 69, are now assisting in the search for Nóra.

Mr Che Zakaria said almost all of the original search zones had been covered and teams were now rechecking areas, including the resort buildings. They are not focused on any one particular spot, he said.

Numerous media reports have said fire-and-rescue personnel, assisted by sniffer dogs, found footprints in the jungle that they thought might be Nóra’s, but Mr Che Zakaria said yesterday that no footprints had been found.

Questioned about the living room window through which police think Nóra may have exited the guest house, Mr Che Zakaria said the window could be opened from outside if not locked on the inside.

Police have released photographs of the living room window, on which they found unidentified fingerprints, which are being analysed.

To aid in the search for Nóra, a recording of her mother Meabh’s voice is being played via loudspeakers. The voices of other relatives have also been recorded. Search teams are also playing the recording of Meabh’s voice on their mobile phones as they go through the jungle.

Malaysian police have said Nóra’s disappearance is being treated as a missing person case and that there is no evidence of foul play, but have said they are ruling nothing out. Nóra’s relatives believe that she has been abducted.