Films such as ‘Gravity’, ‘Lincoln’ and ‘Captain Phillips’ to be screened over holiday period 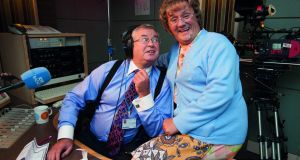 RTÉ One is turning to a perennial ratings favourite Mrs Brown’s Boys to underpin its Christmas schedule.

The commercially successful but critically panned Mrs Brown’s Boys D’Movie will be shown on Christmas Night.

There are also Mrs Brown’s Boys specials scheduled for Christmas Eve and New Year’s Eve. The show was the most watched television programme last Christmas in both Britain and Ireland.

RTÉ One will also screen Oz The Great and The Powerful and Brave on Christmas Day. Gravity will air on Christmas Eve while Captain Phillips and Lincoln will be shown on St Stephen’s Day.

One of the highlights of Christmas Eve will be carols from Áras an Uachtaráin (6.15pm). Among those participating will be Imelda May, Iarla Ó Lianáird, John Sheahan, Mick Flannery and Dutch special guest star Gert van der Vijver, aka The Sand Magician.

They are joined by children from Rutland Street National School, Dublin and Carlow’s Aspiro Choir, plus the RTÉ Concert Orchestra.

The station will delve into its past to bring a touch of nostalgia to its Christmas fare. Well Holy God It’s Glenroe will recall the now defunct Sunday night drama whie Mike Murphy will challenge contestants with trivia from past

On Christmas Day, Francis and John Brennan are back to undertake a Christmas project on At Your Service.

On Christmas day RTÉ 2 will screen the rescheduled U2 iNNOCENCE + eXPERIENCE concert recorded live in Paris.

The Rubberbandits will present their irreverant guide to 1916. Among the films being screened on RTÉ 2 include ET to One Direction: This is Us.

RTÉ Radio 1 is out and about broadcasting live with The Ryan Tubridy Show from The Shelbourne Hotel and Dublin Airport, The Ray D’Arcy Show from the Cliff Townhouse Hotel and Joe Duffy with his traditional Christmas Eve on Grafton Street.