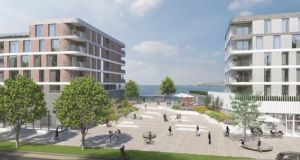 An image of the proposed development at the former Techrete site in Howth, Co Dublin. Photograph: Marlet

The construction of more than 500 apartments on a controversial former industrial site in Howth village Co Dublin has been approved by An Bord Pleanála.

The derelict Techrete factory site near the seaside village’s Dart station was the subject of a number of previous plans for residential development in the last five years.

The previous schemes were for less than half the number of homes for which developer Pat Crean now has permission. Locals had warned a previous application for 200 homes would cause severe traffic congestion on the main road to the village and would amount to over-development of the site.

The new complex of 512 mostly one- and two-bed apartments between the Howth Road and Claremont beach to the west of the harbour, will be built in blocks up to eight storeys tall with 439 parking spaces and 1,335 bike spaces.

The plans from Atlas GP Ltd, a subsidiary of Mr Crean’s development company Marlet, also include a publicly accessible walkway and cycleway, a civic plaza, a landscaped park and communal gardens. Shops, a restaurant, and a cafe at ground-floor level also feature.

The number of apartments exceeds the total number of homes Fingal County Council had designated for Howth in its 2017-2023 County Development Plan, which saw the village as having the capacity to accommodate 498 homes over a five-year period.

However, in its decision the board said the development was “justified” in line with a number of Government policies, including the policy to “ramp up delivery of housing”.

The scheme would “respect and enhance the historic and architectural character of the area”, the board said and its height and quantum of development were “acceptable”. It would also support the “commercial role of Howth’s town centre and would be acceptable in terms of pedestrian and traffic safety and convenience”.

Mr Crean was last month granted permission for the redevelopment of another Howth site, the former Baily Court Hotel at the other end of the village. The approval by the board of his plans for 177 apartments came less than two months after the High Court quashed permission for a smaller scheme at the site.

Locals in Howth opposed the construction of the 177 apartments in three blocks up to five storeys high, as well as the earlier development of 164 apartments, on a site overlooking Howth harbour and close to the village Martello tower.

In February, Mr Crean was granted permission for 650 apartments beside St Anne’s Park in Raheny. This decision is also the subject of a High Court action.

A previous application for the Techrete site by Grant Thornton, as receivers of Ray Grehan’s Glenkerrin Homes, for 145 apartments and 51 houses on the site, was granted permission by the board in 2016. This decision was the subject of a High Court challenge by a local resident, with Labour TD Aodhán Ó Ríordáin and former senator Averil Power, listed as notice parties.

The challenge failed due to the complaint not being made within the time limits for objections to planning decisions.