While largely due to Covid-19 pandemic, Brexit is already ‘having an effect’ on economy 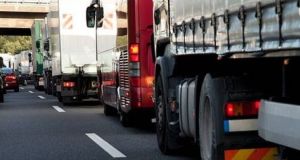 More than 3,000 businesses have “gone bust” since the start of the Covid-19 pandemic but Brexit has probably contributed to the failure of some, the Dáil has been told.

There were also warnings of unexpected consequences when Brexit takes effect from January 1st “some serious possibly, some not so serious”.

But Minister of State for European Affairs Thomas Byrne said among the certainties was that “there will be no hard border on the island of Ireland and common travel arrangement will continue to apply”, which included the freedom to move goods north and south.

Mr Byrne also advised traders seeking to get goods to continental Europe to switch now to direct ferry services to mainland Europe as a “matter of trial”. He said that in the past year direct services had increased and more were coming on-stream.

The warnings and advice came as the Dáil debated legislation aimed at lessening the impact of Brexit, including measures to safeguard the Irish-UK Common Travel Area.

Aontú TD Peadar Tóibín said that, in a parliamentary reply, Minister for Enterprise Leo Varadkar told him that up to August “3,236 businesses have gone bust in the State largely due to Covid. But some of the Brexit changes are probably having an effect on those businesses”.

Mr Tóibín said the figure was probably an underestimation because most businesses going under this year would not be known about until the tax year in 2021.

Mr Byrne said “things will happen in the New Year that perhaps we weren’t expecting, some serious possibly, some not so serious” and people should be prepared for that.

Meanwhile, the Government has been warned in a briefing note by officials that disruption at ports and airports due to Brexit in the New Year are likely to be exacerbated by the Covid-19 pandemic.

Covid-19 “will have an impact on the timetable for work at both Dublin Port and Rosslare Europort”, it notes.

Government officials say an assessment is being undertaken in relation to the impact of Covid-19 on the operation of checks and controls “so these can be carried out in a way that is safe from a public health perspective”.

Extra infrastructure will be needed at ports and airports because of Brexit, mainly for customs, sanitary and phytosanitary (SPS) controls and health checks.

According to the briefing document, the infrastructure which is needed at Dublin Airport for Brexit controls is now complete while “work to further enhance the facilities and Dublin Port and Rosslare Europort for the long-term is well advanced”.

It cited further concerns about the UK landbridge, currently the fastest and cheapest route between Ireland and continental Europe for importers and exporters, with most drivers using Holyhead, Liverpool and Dover.

“While the Government has worked with our EU partners on addressing challenges in EU ports for transit landbridge traffic, there is little we can do to address delays and blockages at UK ports,” officials said.

“The Government has pointed out for some time now including in our readiness plans in 2019 and 2020 that there will likely be delays at ports immediately after the end of the transition period with Dover-Calais identified as a particular likely bottleneck.”

It said: “Traders should consider switching to direct route options where feasible.”

The briefing also says that the Government was “aware” of reports that Northern Ireland ports would not have the necessary infrastructure in place by the end of December.

“We understand that the authorities in Northern Ireland are working closely with the European Commission Task Force on temporary measures and arrangements to ensure that the SPS aspects of the Protocol can be implemented in full from January 1st 2021.”

Earlier, Taoiseach Micheál Martin issued a fresh warning about the damage likely to be caused by a no-deal Brexit.

With 49 days until the UK leaves the EU, and no agreement yet on a post-Brexit trade deal, Mr Martin gave an interview to the BBC saying: “We’ve all had a very significant shock to our economic system because of Covid-19 — the last thing we need now across all of our respective economies is a second major shock.”