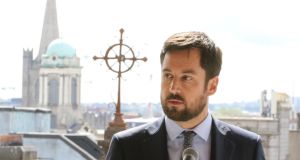 Minister for Housing Eoghan Murphy said ‘there is a lot more work that has to be done’ in dealing with building defects. File photograph: Nick Bradshaw

Minister for Housing Eoghan Murphy has said the Government “absolutely” needs to do more work on providing consumer protection for people living in apartments with building defects.

Speaking at the launch of a report on sustainable apartment living in Ireland, Mr Murphy said he found it “very interesting and very humbling” that countries such as Finland had such high levels of compliance with building regulations in multi-unit developments.

“Finland have been doing this for more than 100 years, and we might just be at the first 10-15 years if you think about it, in terms of bringing into place not just laws but norms around apartment building. So it is important work, but very much at the beginning, and there is a lot more work that has to be done,” Mr Murphy said.

The report focuses on the problem of defects in fire-stopping, roofs, windows, facades and mechanical installations in boom-era builds.

“Building defects is a huge issue and it is inflicting significant reputational damage on apartments as a housing solution. The failings of self-certification in Ireland’s longest period of apartment construction have resulted in a large number of apartment buildings and owners having to fund defects,” the report states.

“The question of whether new building regulation reforms introduced in 2014 are enough to deliver confidence to purchaser of apartments and eliminate building defects from our new developments remains.”

The report also says there is “little by way of collateral warranties or latent defect insurances for apartment buildings. Instead, in the past, houses were sold with inadequate structural guarantees”.

In his conclusion, Mr Mooney writes: “One could take the view that the system is designed to avoid responsibility and decision-making, making it easier to identify another department or regulator that may be responsible . . . we cannot leave a fundamental requirement such as housing to remain in an unregulated or ambiguous environment”.

The report recommends the establishment of a housing regulatory authority, under the Department of Housing, to ensure owners’ management companies comply with building regulations and fire safety certificates.

This regulatory authority would also have a tribunal function to adjudicate over disputes in owners’ management companies as well as an inspection process to ensure compliance with building regulations.

Mr Murphy said he would take the report and “talk to the Minister for Justice, talk to my own people to see what pathway we can find to implement those recommendations that we think are necessary and doing it in a way that is timely”.

Reacting to the report, Bryan Maher of the Apartment Owners Network said “the Government can no longer stick its head in the sand over this issue”.

“We have a massive defects issue in multi-unit developments right now, and the insurance companies are the only ones investigating it.

“A huge number of people who we deal with cannot go back to the developer with the issues because the developer is gone. So now you’re dealing with a bill of a million euro. Where do you go? What do you do? It’s impossible. We have nobody to borrow from, there is nothing set up, we are in a complete bind here.

“The Government can no longer stick their heads in the sand over this. The setting up of a regulator addresses this,” Mr Maher said.