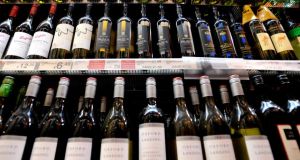 The Government is under increasing pressure to ban below-cost sales of alcohol as figures indicate the taxpayer is effectively subsidising the drinks industry and supermarkets by €21 million a year through lost Vat and excise duty.

Minister for Children James Reilly acknowledged that underage and below-cost sales of alcohol “must be addressed” because retailers have been reclaiming Vat for losses on products they decide to sell below cost since the Groceries Order banning such sales was abolished in 2006.

The National Off-Licence Association estimates the exchequer loss at €21 million annually based on the volume of alcohol sales.

Mr Creed said that if a supermarket buys a bottle of beer for €1 and sells it for 50 cent, the retailer only pays excise and Vat on the 50 cent. “This is an absurd taxpayer subsidy to the drinks industry.”

He said main supermarkets were benefiting and not small off-licence stores.

The alcohol market in Ireland is worth over €6 billion a year and the off-sales element is used by supermarkets to bring in customers. Tesco controls more than 50 per cent of the off-licence trade in Ireland, and 95 per cent of all carry-out business is done by five outlets, Tesco, Dunnes Stores, Centra, Spar and Costcutter.

While the costs associated with consuming alcohol in Irish pubs have increased by more than 300 per cent since 1990, the price of alcohol in off-licences has halved.

Mr Creed said yesterday there had been a six-fold increase in the number of off-licences in the past 10 years but a 20 per cent drop in the number of pubs. He said below- cost sales specifically of alcohol should be banned and this could be done “with a stroke of the pen” by the Minister for Enterprise.

Mr Creed said Government policy on below-cost alcohol sales was “shambolic”. He said his colleagues in Cabinet were “abdicating responsibility” in waiting for an EU Commission ruling on such sales.

A spokesman for Minister for Enterprise Richard Bruton said it was up to retailers to decide what prices to charge customers.