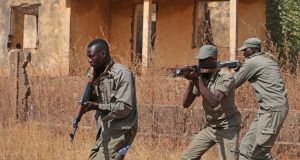 Troops at a military centre in Mali during a visit by Taoiseach Leo Varadkar. Photograph: The Defence Forces

A European Union military training centre in Mali, where 11 Defence Force personnel are working, remainson high alert after a weekend attack from what are presumed to have been Islamic anti-western forces.

An as yet unknown number of attackers were killed in the incident. Three Malian soldiers were wounded but have since been released from hospital. No Irish military personnel were injured, according to the Defence Forces.

The attack happened at around 3am on Sunday when two vehicles loaded with explosives approached the Koulikoro Training Centre which is approximately 100 kilometres east, north east of the capital, Bamako.

The attackers approached the main, southern side, entrance gate to the centre, dismounted their vehicles and began firing.

Force protection soldiers at the centre repulsed the attack, according to the European Union Training Mission (EUTM) in Mali.

A total of 20 Defence Forces personnel are deployed with EUTM. Nine of them are based at EUTM headquarters in Bamako, while 11 are deployed to the centre in Koulikoro.

The 11 are involved in helping train members of the Malian army. That training involves how to counter improvised explosive devices (C-IED), in which the Irish Defence Forces have expertise unrivalled within the EU, urban warfare (effective fighting in built-up areas) and humanitarian law (with special reference to correctly handling civilians and refugees caught up in conflicts).

Last month, Taoiseach Leo Varadkar, and the Chief of Staff of the Defence Forces, Vice Admiral Mark Mellett, visited the mission and met Irish personnel there.

Mali is a former French colonial possession in western Africa, south-west of Algeria. Its northern region stretches deep into the Sahara while the southern and western parts border Senegal and the Ivory Coast, and are tropical in character.

Mali gained independence from France in 1960 but has not benefited from consistent stable self government since. In 2012, Islamic elements took over a separatist revolt by ethnic Tuaregs, nomadic people living in large swathes of land straddling several south Saharan countries, and sought to impose Sharia, or Islamic religious, law.

In 2013, the Ismalists launched attacks aimed at capturing Bamako. Fearing a humanitarian refugee crisis, the United Nations Security Council called on regional and international organisations to provide co-ordinated help to stabilise the situation, a call supported by the European Parliament.

The EU responded and in January 2013, set up the EUTM. Its mission is to help restore constitutional and democratic government in Mali and the rule of law throughout the whole country.

At the same time but separately, a French-led military operation, which did not involve Irish forces, drove back the Islamists. However, large parts of the country remain under no effective control, national or international, and are a platform for frequent attacks on the EUTM.

The first Irish troops were deployed to the mission in 2013 and the current contingent is the 12th rotation of Defence Force personnel.

According to EUTM, as the weekend attack was being repulsed, one of the two vehicles involved was burned out and the second one exploded.

The three wounded Malian soldiers were brought to ROLE 2, an EUTM hospital currently staffed by Serbian medics from where they have since been discharged.

There are no plans to reassess Irish involvement in the mission in light of the current situation.