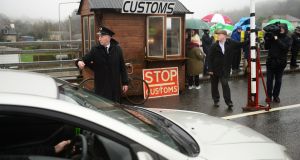 John McNamee, dressed as a customs worker, joined members of Border Communities Against Brexit to protest against Brexit by setting up an old customs post at Carrickcarnon in February 2017. Photograph: Dara Mac Dónaill

With his forthcoming White Paper on a united Ireland, Micheál Martin is seeking to strip a charged topic of some of the substantial layers of emotion applied over decades, often by his own party.

It is no surprise that Fianna Fáil favours a united Ireland but Martin is now seeking to cast the argument for reunification in practical terms.

Brexit has resurrected a debate that had been confined to Sinn Féin calls for a poll on the Border, as allowed under the Belfast Agreement. The Government has placed Northern Ireland and possibly unity near the top of its Brexit agenda.

Yet Martin says his thinking on the White Paper pre-dates Brexit. He has been formulating his approach over the past two to three years, and is somewhat taking his cue from the approach of the Scottish National Party (SNP) in 2013, ahead of the 2014 independence referendum. They, too, produced a White Paper, to give detail to their goal.

The Brexit referendum itself – when voters chose to leave the EU without a proper idea of their future relationship with the bloc – illustrates how not to approach a unity referendum, Martin says.

Nobody, he argues, should be in any doubt about what a future united Ireland would look like before they cast their ballots.

“I want to pin it on the idea of the blueprint, the idea of what it would look like. To try and identify what we are talking about. Moving well beyond the fourth green field.”

“The very fact of not naming a date or not using a timeframe is evidence of the type of consensus, harmony-building approach I want to see.

“The unionist community go back into their trenches if they feel there is a threat or acceleration towards unity. To a certain extent, that actually works against the unity agenda.”

His paper will propose 12 concrete ideas that would help cross-Border relations before any referendum is held. One proposal is to begin an alignment of school curriculums, starting with English and history.

The decade of commemorations shows how a common historical understanding can be reached.

“[Sinn Féin’s] Gerry Kelly once said there are two narratives and we should get on with it. In that you have a republican narrative and unionist narrative. We don’t agree with that. You can develop, in history, common understood narratives, greater understanding of a common history.”

Another practical proposal is a unified enterprise agency that could, he says, attract foreign direct investment to areas such as the Donegal-Derry region, unhindered by the Border

On the broader constitutional arrangements, Martin casts his thinking as an “evolution” of the Belfast Agreement, albeit with influence shifting from London to Dublin.

“People must understand that a future united Ireland will very much involve a three-strand approach,” he says.

“There would have to be a UK-Ireland agreement and it could be a reverse to where we are now. You could have a united Ireland emerging that still has a UK involvement, where you still have dual citizenship.

“Unionists still feeling they are part of the UK but it would almost be a reverse dynamic to the one you have at the moment where the emphasis is on Westminster and the Westminster government.”

This would include a “long-term” agreement with the UK government to ensure that Northern Ireland does not fall off a financial cliff edge but is weaned off its current block grant from Westminster.

The economic challenges will take years to address, as the Northern Ireland economy would have to be transformed from one that is heavily dependent on the public sector.

The SNP White Paper somewhat fell down on the question of sterling and how an independent Scotland, freed from Westminster, would fund itself.

The ideal for many would be that a question of such importance as Irish unity would transcend the euro, pounds, pennies and cents but recent opinion polls suggest otherwise.

The British government has estimated that its block grant to Northern Ireland will be worth €12.5 billon by 2020.

Martin acknowledges it will not only be people in Northern Ireland who would have to be persuaded.

“I see some of the surveys saying that if you had to pay extra tax, would you vote for it and the polls go down.

“It is not a slam dunk by any means. The people of the Republic need to be taken along as well.”

Brexit, and the way in which Northern Ireland would develop outside the EU, at least means Irish unity is being seriously discussed in a way it hasn’t been in decades.

A detailed White Paper from Martin will be a valuable contribution to the debate.