Arriving at the Dublin count at the Convention Centre, Independent candidate Peter Casey says he will run for president again - unless he is Taoiseach at the time of the next presidential election. 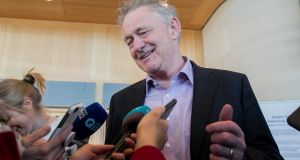 Peter Casey: ‘I’ll definitely not be standing as a county councillor, that’s far too much hard work.’ Photograph: Gareth Chaney/Collins

Presidential runner-up Peter Casey has said he plans to join Fianna Fáil with a view to eventually becoming Taoiseach, although leader Micheál Martin has already poured cold water on the idea.

The presidential candidate said he intends to run in the next general election in Donegal, with a view to becoming head of a renewed and revitalised Fianna Fáil, according to an interview with the Sunday Independent.

“The Fianna Fáil party was always about the people of Ireland, but I believe the party has lost its way in recent years and lost this position, as the party that listens to ordinary people of Ireland and represents their concerns,” he said.

“I want to be the one that leads Fianna Fáil back to its natural home as the party of the people, to get outside of the bubble of Dublin and Leinster House and the political and media establishment.”

The Derry man, whose campaign was marked by criticisms of Travellers and their separate ethnic status, polled strongly with 342,727 votes, or 23.25 per cent of the overall vote. President Michael D Higgins was re-elected comfortably with 822,566 votes, or 55.81 per cent.

“I was listening to Peter this morning and I didn’t get any clear coherent sense of ideas he wants to take forward,” he said.

“I heard Peter describe himself as a compassionate socialist and compassionate capitalist in the same sentence so it seemed he was almost heading towards a middle ground very quickly.”

Mr Martin said he recognised Mr Casey may have struck a chord with the electorate with his outspokenness, but said he did not get sense of a move to the right in Irish politics.

“This is a presidential election, people may feel a bit more liberty to vote in a certain direction and will vote differently in a general election because it’s a about the formation of a government and differently too in local election and European elections,” he said.

Mr Casey says there is no longer any need for him to publish his tax returns as the presidential election is over.

Asked about his tax returns Mr Casey said: “I am totally tax compliant in every jurisdiction”.

Mr Casey had previously said he was in the process of changing his tax status as he is currently not tax resident in Ireland.

Asked if he would run for the European Parliament next year he said: “I’m not sure that would be the course for me”.

Arriving at the Dublin count at the Convention Centre on Saturday, Mr Casey said he was “disappointed” by his expected second place finish as “I really thought I had a very good chance of winning”.

Mr Casey said he would join a political party or form his own. He quipped that he would run for president again - unless he is Taoiseach at the time of the next presidential election.

Speaking about his future political ambitions, Mr Casey said he would make a decision “next week”.

Mr Casey told RTÉ’s Marian Finucane Show that he was a compassionate socialist, but does not feel he fits into any political party. “We do need to look after the people who need looking after. Can’t give social welfare if there’s no money in the kitty,” he said.

He also appeared to do a u-turn on comments he made earlier on Saturday that there was a need for a new political party. “There are enough political parties,” he said.

Mr Casey believed the likely results were a “frustration vote”.

“There had been three and a half years of “this being no Government and we’re now talking about extending that period”.

He said with 6 per cent unemployment that meant 94 per cent were getting up in the morning and “struggling”.

“Middle Ireland – they’re the ones that are really frustrated”.

Mr Casey also said if Mr Martin had stuck to a two-year arrangement for the confidence and supply Government “he’d be Taoiseach now”.

He again rejected as “absolutely untrue” suggestions that his remarks about Travellers were racist.

Mr Casey said you cannot be racist if you do not regard the people you’re talking about as a different race. “They’re Irish people and proud Irish people so that’s not possible.”

Asked what political party he identified most with he said his politics were “more left of centre than right of centre” and there was not a lot of difference between the parties.

Mr Casey said he was still waiting for Taoiseach Leo Varadkar to apologise to him. “I think it’s the first time in history that I’m aware of that a Taoiseach has come out against a person who was nominated by four counties. He went and said to people not to vote for me. I think that’s disgraceful.”

Asked what politician he identified with he said: “I don’t really have any idols in Irish politics.

“Obviously John Hume was such a courageous and great leader and was not afraid to say things that were not particularly popular.”

He competed in the presidential election because it was an opportunity to make a difference, Mr Casey said.

Cork North Central Sinn Féin TD Jonathan O’Brien acknowledged Mr Casey had beaten their candidate Liadh Ní Riada in working-class areas such as Gurrranabraher, Farranree, Churchfield and the Glen where the party had performed strongly in the last general election.

“I think a lazy analysis will be that Casey took our vote in working-class areas,” he said.

“But it’s pretty clear that we didn’t get our vote out and that is something we need to reflect on but I don’t think it’s as simple as saying Casey took our votes in working class areas - our vote didn’t come out. I’ve no doubt some of it went to Michael D as well because he is a popular president.”