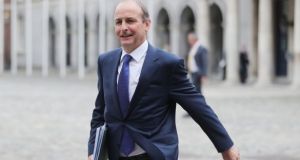 The Taoiseach said the Government had been focused on the economic implications of Covid-19 and the preparations of a stimulus package for the economy. Photograph: Niall Carson/PA Wire

Taoiseach Micheál Martin has said the Government has made a “very strong start” despite a series of political controversies in its first three weeks in office.

He suggested he had never seen a month in which the Dáil had been so productive in producing legislation much of it with the cooperation of the opposition.

Since he was appointed Taoiseach on Saturday June 27th, Mr Martin has had to deal with his sacking of minister for agriculture Barry Cowen and grumblings from his party that he had not appointed any minister from the west of Ireland or from the mid-west.

He has since appointed Mayo deputy Dara Calleary, who had been chief whip, as Minister for Agriculture to replace Mr Cowen.

Mr Martin said he “simply didn’t have enough positions” to satisfy everybody and most members of his party understood that fact.

Speaking in an interview with RTÉ’s northern editor Tommie Gorman, Mr Martin added: “My obligation overall is to the people of Ireland. We are going through a challenging time. It’s unprecedented, the impact on our economy and social life and we simply have to deal with that. The party understands that. They want us to get on with that very difficult task.”

He said the Government had been focused on the economic implications of Covid-19 and the preparations of a stimulus package for the economy.

He reiterated that his decision to sack Mr Cowen was a fair one given Mr Cowen’s reluctance to make a further statement to the Dáil about the circumstances in which he was caught drink-driving on September 18th, 2016.

Mr Martin was shown the Garda Pulse file in relation to Mr Cowen’s conviction. Mr Cowen is disputing the facts set out in it that he tried to evade a garda checkpoint.

“I was of the view on Tuesday morning that he should go into the Dáil,” Mr Martin explained.

“He took a different route. He was taking a legal route. In my view when you are in a ministerial position, you have to account to the Dáil no matter how difficult it is. I don’t think it was tenable, having seen the file, that he wouldn’t go into the Dáil. It was a very difficult decision that I had to take.”

Mr Martin told RTÉ he did not see a united Ireland in the lifetime of his Government, saying that “rhetoric is easy” in that regard.

While the Good Friday Agreement made provision for a border poll, it also enshrined the principle of consent, he explained.

He had been influenced by former SDLP deputy leader Seamus Mallon who told him before he died that communities had to find a way to live with others who had been living in the same area for 400 years.

Mr Martin has set up a united island unit within his department which will look at ways of enhancing cooperation between the two jurisdictions on the island of Ireland.

“We could have a poll in the morning. It could lose or it could win but I’m not sure it would move things on in those areas,” he said.