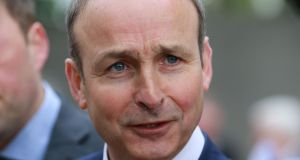 Micheál Martin says: ‘I am blocking nobody from running for anything.’ Photograph: Nick Bradshaw

Sitting Fianna Fáil TDs will not be blocked from standing in this year’s European Parliament elections, party leader Micheál Martin has said.

Mr Martin made the comments in response to speculation that he is not in favour of Billy Kelleher, a senior Fianna Fáil TD, running in the Ireland South constituency.

“I am blocking nobody from running for anything,” Mr Martin told RTÉ’s This Week programme. “People will be in a position to put their names before convention and I am not going to stop that; obviously there is a national constituencies committee that will look at electoral strategy for the party for Europe. ”

The Irish Mail on Sunday reported that Mr Martin is instead backing a Cork city based councillor, Seamus McGrath, and brother of Fianna Fáil finance spokesman Michael McGrath, to be the party candidate for the Ireland South constituency. Mr Kelleher, a TD for Cork North Central, has publicly declared he will contest the party’s selection convention, while Offaly TD Barry Cowen is also said to be interested.

Mr Martin made comments to the Fianna Fáil national executive last week, in which he is said to have indicated that members should think of the broader interest of the party when selecting MEP candidates, which some present took as a hint that sitting TDs should not stand in the European elections.

It comes as yet another Fine Gael figure expressed an interest in standing for the party in the European elections, which take place at the end of May.

Senator James Reilly, a former minister for health and Dublin Fingal TD, told the Sunday Business Post: “A few people approached me and asked me to consider it because it wasn’t something that was on my mind particularly.”

He joins former tánaiste Frances Fitzgerald and Mary Mitchell O’Connor, the Minister of State for Higher Education, who have also declared an interest in standing in the Dublin constituency for Fine Gael, with outgoing party MEP Brian Hayes leaving politics. Paul Kehoe, another Minister of State, and John Deasy, a Waterford TD, are also considering standing for Fine Gael in Ireland South.

At a selection convention in Tipperary on Sunday, Sinn Féin MEP and former presidential election candidate Liadh Ní Riada was chosen by the party to retain her seat in Ireland South.

She claimed Fine Gael, in the European Parliament, “brazenly support motions that dilute our sovereignty”.

“And make no mistake, Fine Gael MEPs are firmly wedded to following a path which will see Ireland pushed into an EU army.”

“As a former chair of the European Union Affairs [committee] in the Oireachtas, I am well aware of the challenges posed by Brexit and I will be pushing for Ireland’s interests to be protected in the parliament,” Mr Hannigan said. “We need an MEP with links to the socialists and democrats in the parliament – the second biggest group – and I have those links.

“The challenge is big but I believe I have the energy, knowledge and commitment to win this seat.”