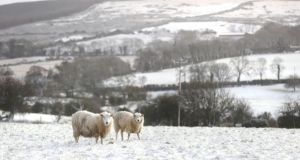 Three separate weather warnings have been issued by Met Éireann.

A status yellow weather warning for snow and ice for Connacht, Cavan, Monaghan, Donegal, Dublin, Louth and Wicklow comes into effect at 8pm on Wednesday and remains in place until 10am on Thursday.

The forecaster said it would be “icy in parts tonight with wintry outbreaks”, and that there would be “some snow accumulations possible before morning, mainly across the north and on higher ground elsewhere”.

A status yellow wind warning has also been issued for Wexford, Wicklow, Cork, Kerry and Waterford which is valid from 6pm on Wednesday until 2am on Thursday. Gusts of up to 100 km/hr, mainly in coastal areas and on high ground, are forecast.

In addition a status yellow wind warning for Dublin and Louth has been issued and this is valid from 11pm on Wednesday until 3am on Thursday.

“A low pressure system that is going to move up from the mid-Atlantic is going to steer in,” she said. “During the evening hours, after dark, we’re going to see some wet and windy weather moving up countrywide. There will be widespread falls of rain through the early part of tonight.

“There will be come wintery precipitation mainly up over the north midlands and Ulster. There will definitely be some snowfall and widespread falls of sleet at the very minimum.

“There may be a requirement for a snow and ice warning tonight but it will probably be confined to Ulster.”

Ms Ryan said there would be a “gradual deterioration” from Friday ahead of the expected arrival of Storm Dennis over the weekend.

That will bring “high volumes of rain”, she said, as well as a “sustained spell of high winds” for 48 hours straight over the weekend. It will be “very windy, very wet and possibly stormy”, Ms Ryan said.